Construction remains one of the most male-dominated professions left in the United States, just slightly better than the National Football League. The U.S. Department of Labor estimates that women hold just 3 percent of the 7 million construction industry jobs in the country. This isn’t much different from the number of women in construction in the 1970s.

Many women never even consider working in construction due to a lack of role models. The current absence of women craft professionals stamp construction as a “boys only” club, a stubborn stereotype that is untrue but continues to persist.

It didn’t deter Reina Montoya of San Diego, who completed her apprenticeship training with ABC San Diego’s Apprenticeship Training Academy in June. She is currently working for Bergelectric as an electrician. Montoya was one of five Academic Achievement Graduates, completing the four-year program with a straight A average and minimum absences. 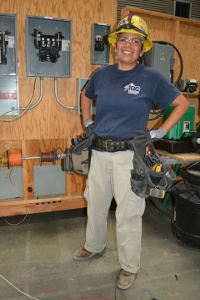 “It was a personal goal of mine to get straight As during all four years of the program,” Montoya said. “The way I saw it, I was given an awesome opportunity when I got accepted into this program. I wanted to give it my 100 percent effort. That and I wanted to show my employer that I was committed to learning and stand out from the rest of my colleagues.”

Montoya says she was exposed to construction early in her life. “As a little girl, I enjoyed building stuff with my dad and was fascinated by the tools he’d use to assemble things together,” she said. “My earliest memory is helping my dad weld my first swing set together. The skills and lessons he taught me stayed with me through the years.”

“I think that if I had known about these opportunities in high school, I would have begun my career in the electrical field a lot earlier,” she said. “It was my belief that the only way to get ahead in life was to go to college, but I learned that college isn’t for everybody.

“Through the Apprenticeship Program, one can still learn lots of valuable information, earn college credits, and have a career which one can be proud of while earning a good paycheck.”

It was Montoya’s father who provided the spark for her career choice. “My friends, family, and my significant other, Sam, have always been very supportive of me going into the apprenticeship program. It was my father who suggested that I look into the electrical trade. After researching my options I decided to apply to ABC because of the college credits I could earn and the duration of the training itself,” Montoya said.

Montoya met her biggest challenge in the physical demands of the job, but found they can be met.

“As an example, I would have to take more trips than the guys, as I’d carry lighter loads, in order to keep up and carry my own weight. At the beginning, installing 25-pound light fixtures overhead into a ceiling grid while standing on a ladder was a challenge for me. My arms felt like Jello at the end of the day,” she said.

Montoya says with persistence, a woman can build up the strength and stamina to keep a steady pace and complete tasks.

Montoya said there are also advantages women possess in the construction field.

“Women tend to have better manual dexterity, the ability to multi-task, and tend to pay better attention to details,” she said. “According to my instructor, women also have a better ability to retain important facts and plan ahead.”

“My advice to other women would be to speak up and not be afraid to ask for help, or speak up if you have input,” she said. “In the beginning, going to school at night and working during the day may be challenging and require adjustments, but don’t give up. There are times when things may get tough and your time is super limited, but just keep going.”

Montoya intends to further her education so she can remain valuable to her employer. She says she is looking into Auto-Cad design courses, which will be her next educational undertaking, with the ultimate goal of being a project manager.

Montoya’s timing couldn’t be better. While other fields struggle with gender-based disparities in pay between men and women, the construction industry has been successful in closing the gap. According to the Institute for Women’s Policy Research, 40 percent of all female construction craft professionals earn at least $50,000 a year.

Industry leaders, educators, career counselors, advocacy groups and parents everywhere can help give other young women like Reina Montoya the opportunity to explore careers in construction. It is a step toward wage equality in the workforce for women while simultaneously addressing the skilled craft professionals shortage by attracting more women to the construction field. It benefits everyone involved.