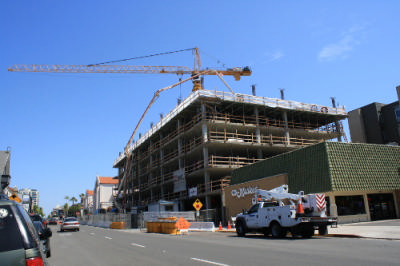 With the recent opening of Alliance Residential Co.’s Broadstone Balboa Park, interest is strong in Bankers Hill, also referred to as Park West. The Vue on Fifth by ColRich Communities is expected to come online in early 2016, while The Park by Zephyr and Icon Properties’ re-branded 41 West will follow.

And more projects will be coming.

Winslow recently listed a 0.65-acre parcel on the northern portion of the block bounded by Fifth and Sixth avenues and Olive Street, surplus property owned by a subsidiary of The Cathedral Church of St. Paul. A parking lot and apartment building are on the site, but it is already entitled for 65 high-end housing units in 15 stories and 900 square feet of retail space; an additional 81 residential units could be added through amendments. The church is asking for 14,000 square feet of office space, along with parking.

In early August, Winslow said there already had been “boatloads of interest” in the site and that it would continue to get attention. There is no set asking price; Winslow said the church property is worth “a lot.”

Just south, on a property that was also previously owned by St. Paul’s Cathedral, construction is underway on Vue on 5th, a luxury condominium project. The fifth level was poured in mid-August, said Sylvia Rose, sales representative for ColRich. The lengthiest aspect of construction was excavation and subterranean parking, but ColRich anticipates it will speed up from this point.

The seven-story, 45-unit luxury condominium project should be complete in February or March 2016, Rose said, with a model home potentially ready by November or December of this year. Vue on 5th touts high-end finishes and indoor-outdoor living. Residences will range in size from 1,318- to 3,720-square-feet and include two to three bedrooms and two to three-and-a-half baths.

As of early August, 10 of the 40 single-story condos had been sold, and of the five two-story penthouses, one had a sale pending.

Icon Properties is bringing another high-end luxury product to the block, at the corner of Fifth Avenue and Maple Street. Featuring a boutique collection of 41 condos, 41 West was rebranded to emphasize the exclusivity of the project and its spacious units, said AJ Tangsoc, owner of Icon Properties.

The project was previously called Regent on 5th. New displays around the property, which just saw the demolition of the Mandarin House restaurant, ask passers-by, “Will you be one of 41?”

The company hopes to break ground by early 2016 or sooner.

A market study of nearby areas found that higher price points were tied to larger spaces, rather than the opposite.

“It was interesting to us, because usually the bigger unit, the more efficient the price per square foot,” Tangsoc said. “That wasn’t the case in Bankers Hill. We saw that and found that quite interesting. We attributed a lot of that toward the difficulty in developing in the area.”

While not a definite at this time, 41 West’s units could have an average of about 1,700 square feet. Units will have two bedrooms and two-and-a-half bathrooms, and 200-square-foot patios.

“We saw that the majority of people living downtown wanted bigger units. And not only did they want bigger units but they wanted more outdoor space,” said Tangsoc, whose company is an arm of his family’s Vancouver-based Regent International Developments Ltd.

Renderings of the project bring to mind others in the area -- with glass exterior walls and large balcony areas -- but Tangsoc isn’t concerned with oversaturating the market.

In fact, he says brokers have relayed that there is pent-up demand for projects that are 1,500 square feet and up with price points above $1 million.

A 3,000-square-foot retail space will sit on the corner of the site.

Zephyr’s 14-story, 60-unit building will include 60 condos in the east tower along Fifth Avenue and low-rise townhomes along the Sixth Avenue side of the block. Units have an average of more than 2,300 square feet and an additional 465 square feet of balcony/terrace space. The project will also include 4,300 square-feet of retail. It’s being designed by architecture firm Dialog.

Zephyr opened a sales office, The Discovery Center, at 3104 Fourth Ave. Ten units have been sold, with a starting price from $1.4 million.

“We’ve been overwhelmed with the positive reception from the community,” said Brad Termini, Zephyr’s co-CEO. “Buyers are excited to have luxury, urban housing options and are even more impressed to have livable outdoor space in an urban environment. Zephyr has been bullish in this market and we are proud to bring a truly high-quality product to the San Diego market.”

Demolition of the vacant Sixth Avenue Medical Center was completed in the spring.

Later in the pipeline, Bankers Hill should expect to see twin midrises, known as 5th and Palm. The Cushman family owns the block between Fifth and Sixth Avenues, bounded by Redwood and Palm. The block is home to Extraordinary Desserts, Sanfilippo’s Italian Restaurant, Evolution Fast Food and a seasonal Christmas tree lot.

The 274,000-square-foot 5th and Palm will combine a 145-unit multifamily market-rate rental building with a 66-unit extended-stay hotel component. The two towers will be maximum 150 feet, with three levels of underground parking.

The timeline is unclear at this point.

The modern, four-story project is expected to be complete next spring. Of the 49 apartments, four will be priced for low-income households. Apartments will be a mix of studios, one-bedroom/one-bath, and two-bedroom/two-bath units.

The company is in negotiations for some of the four ground-level commercial spaces, but Russell did say they may be filled by local owner/operator businesses.

Solar panels will generate half the building’s energy needs.

Meanwhile, a few blocks northwest, construction is progressing on a set of mid- to high-range 10 townhome units at Third Avenue and Upas Street, designed by H2 Hawkins + Hawkins Architects Inc.

Units feature a modern and contemporary design, and are between 1,100- and 1,700 square feet. Construction could be complete in early 2016.

One project is ahead of the rest, with its first move-in occurring months ago, in April.

The building hosts community and private events in hopes of spreading the word about its units, and Carpio said the efforts are paying off in the neighborhood.

Located at Fifth and Thorn Street, the 100-unit midrise was designed by Carrier Johnson + Culture, with interior design by Basile Studio, the sought-after designer behind Ironside Fish & Oyster Bar and Polite Provisions. “We’re blurring the lines between new and old, modern and historic, staying in and going out,” proclaims the project’s website.

The seven-story building offers a mixture of historic bungalows, row houses, studios, one- and two-bedroom units and penthouse loft units, along with a host of amenities to draw residents into common spaces. A clubhouse, rooftop view deck, spa terrace, creative work space, gym and a photo booth in the lobby add to the building’s curated feel.