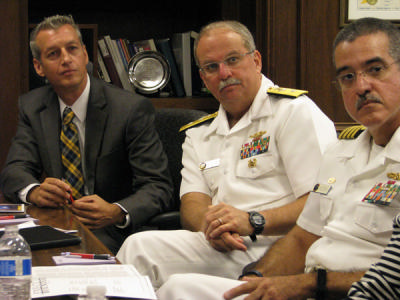 Although a growing niche of health-tech companies in San Diego is creating new technologies aimed at improving patient care, that will not mean much unless there are major changes in the culture at hospitals, clinics and medical research centers, according to participants at a Daily Transcript executive roundtable this week.

Recent innovations range from pill bottles that communicate with doctors and patients about when the next dose is due to wireless messages informing cardiologists about their patients’ heartbeats, pulse and blood pressure, no matter where the patients are.

And then there are the continuing attempts to allow hospitals and research centers to share medical data about patients — and to give patients more control over their own electronic health records.

Capt. Jose Acosta, commanding officer of San Diego's Naval Medical Center, said that using Facebook, the Internet, and Microsoft and Android apps to provide information on wait times at pharmacy can help patients save time when getting prescriptions renewed.

Considering that the center issues 1.8 million prescriptions per year, the time savings can be substantial, Acosta said.

Jeff Gering, CEO of the Veterans Administration in San Diego, said the VA is offering more services over the Web, including mental health counseling, which is particularly useful in Imperial County, which has close to zero psychiatrists or therapists to deal with troubled veterans.

Instead of requiring the veterans to come to San Diego County, they can go to a local clinic for on-line counseling, which is also increasingly available in the patients' homes.

"One big advantage of that is that the no-show rates dropped from around 10-12 percent for appointments in clinics to less than 1 percent at home," Gering said.

But other technologies are slow in rolling out because research labs can be reluctant to share data, hospital bureaucracies can be nervous about innovations, and doctors and nurses may fear that the technologies might overload them with useless information or make them spend more time inputting data instead of dealing with patients.

"Some people say the biggest barriers to new technologies have to do with privacy or security concerns, but those can be dealt with," said Andrea Inserra, senior vice president at the Booz Allen Hamilton consulting firm. "The biggest challenge is to change the culture so that people are more willing to share tools and pool their information together."

As an example, Inserra cited a program she participated in to create more cooperation among 60 cancer research centers after the National Institutes of Health, which provided them with funding, said they were not sharing basic research quickly enough.

"The problem of how to bring the data together came down to having a culture where people don’t want to share, since if they keep the data and publish the results, they become more famous," she said.

Inserra and other consultants persuaded the research centers to share more information because they could save time and money by not reinventing the work that their competitors had done.

"I'm not sure how much we changed the overall culture, but we did change it around the edges," she said.

Rear Adm. Bruce Gillingham, commander of Navy Medicine West, said that while cooperation is the norm in the military, civilian health care providers sometimes have to be convinced that "it's in their enlightened self-interest to cooperate, especially if they can find areas where they can agree there's no need to compete."

Gering said that one of the key cultural hurdles against standing against more information sharing is pride: “People want to be able to say ‘We did it ourselves,’” including information technology designers whose desire to create unique data networks sometimes makes it hard to connect with others.

Austin Neudecker -- a serial-entrepreneur, head of growth at Rev.com and co-founder of AdhereTech, the developer of the smart pill bottle -- said that sometimes it seems that the “oligopoly” of major health care providers tells startups that they are “just not wanted in the health care space,” since providers are trying to protect their turf.

Gering added that in some health care centers, there is sometimes a profit incentive for going slow on new technologies.

Some hospitals might go slow on technologies that allow patients to resolve health questions at home instead of coming into the hospital, where doctors can charge a higher rate — although some of the provisions of the Affordable Care Act are meant to counteract that.

In addition, some technologies add to the doctors' and nurses' workload, requiring them to spend long hours inputting data on the patients in their care, although Gering suggested that one way of reducing that burden is to make patients responsible for inputting the data on their own.

But information overload can also be a problem — providing health care providers with a deluge of data that they have to sift through to get to the information that they need.

“What doctors want is technology that makes the workflow easier,” said Capt. Lisa Mulligan, commanding officer of the Naval Hospital Camp Pendleton. "There's so much information in the record, when the most important thing you want to know is what happened in the past 24 hours.”

Some local companies are working specifically to address the problem of information overload.

AirStrip Technologies Inc., a Texas-based firm with offices in La Jolla, is designed to collect data on patients and then “spit out actionable outcomes,” said Eric Venn-Watson, vice president for clinical transformation at the company. “You can create a huge ecosystem of medical data, but unless it addresses specific patent needs it won’t be adopted.”

Cypher Genomics is trying to achieve the same result with genetic data: using software to collect and aggregate as much data as it can and then mining useful information out of it.

But Ashley Van Zeeland, the company’s chief executive, said that company is more successful at collecting data overseas than in the United States, because in the more unified health care systems in Europe and other regions, providers are much more accustomed to sharing information than here.

Julie McPherson, senior vice president with Booz Allen Hamilton, said that for many health care providers the biggest challenge is how to select which technology to go with, since technologies are evolving so rapidly that it’s necessary to find a system that can adapt to changes.

Anil Keswani, corporate vice president of ambulatory care and population health at Scripps Health, said that instead of building “solutions” to problems that might not exist, technology developers should spend more time listening to healthcare providers to find out what they really need.

“If the entrepreneurs are really smart, they’ll build a lab that’s not built around introducing a new technology, but instead is built around improvements to real-time care,” he said. “That could potentially be commercially rewarding, but the main benefit has to be patient care. If you go in with a pure capitalist mindset, you might end up with the wrong technology.”