End of an era

On at least two fronts 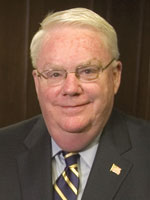 The USS Ronald Reagan, CVN 76, sailed out of San Diego harbor Monday for her new home port of Yokosuka, Japan. She has been based in San Diego since 2004. Over the years, when the Reagan deployed from here, she carried the spirit of California and San Diego to all parts of the world.

She is named for a distinguished president of the United States and a former governor of California. Ronald Reagan, a private citizen when I first met him in a Pacific Palisades barbershop during my high school days in the late 1950s, was an unforgettable figure — just as the ship that carries his name is unforgettable once you see her.

My grandson was at her home porting here on July 23, 2004. He stood proudly on the flight deck at the age of 12. Now a graduate of USNA Annapolis and a naval officer, he is about to chase her across the Pacific and join her, his first ship, somewhere near Japan, where he will be among the very few to attend both her first and second homeportings. Their destinies are intermingled and I, along with all of us at the San Diego Daily Transcript, wish them both "Fair winds and following seas."

Simultaneously, Tuesday marks the last print edition of The Daily Transcript produced under the direction of myself and the Revelle family. We both have deep roots here in San Diego and I know William Revelle, our chairman, shares my sadness that this part of a great adventure is over for us. However, the truth is the vast majority of readers and subscribers are viewing this article in digital format, having abandoned newsprint on their own volition some time ago. 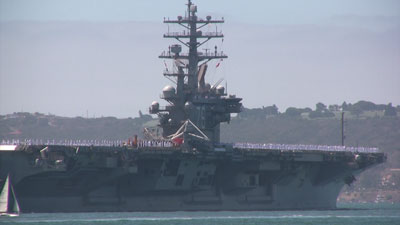 For now, our editors and staff will continue to provide you daily news, data and information digitally, via the San Diego Source and related products both at SanDiegoSource.com, SDDT.com and on your various communication devices via our subscription-based emails.

There has been no change in our decision, announced July 22, to ultimately shut down the company. However, we are in active negotiations with several parties to continue our digital operations. I will keep you posted.

I understand you will receive a print edition of The Daily Transcript on Wednesday produced by the new owners of the name (see "Daily Journal purchases Transcript name, masthead" Thursday, Aug. 27).

There are far too many to name here, but I want to thank all the editors and reporters who have labored so hard to bring you meaningful reports in the newspaper over the 23 years I have had the privilege to lead this organization. Many of those who worked and trained at the Transcript way before my time with the company continue to work in the news industry and I wish them well.

I also want to thank all of those who have labored behind the scenes in places like delivery, production and the press to keep a newspaper arriving on your driveways and in your mailboxes every business day. Their diligence is much appreciated.

Thank you also to everyone who has called and emailed their good wishes to us since we made the announcement of our exit from the San Diego business information scene. It has been heartwarming to know how many people know of and value our efforts.

We will catch up with you Wednesday in cyberspace. Look for our early-morning and subsequent emails followed by the usual flow of information via the Web on your preferred communication device.

thanks for the many years of great journalism and promotion of business in SD....you will be missed...I start my day reading 4 newspapers...print edition...and believe I stay much more current ...flipping pages...than via the digital world...I speak all over the world...and those paper newspapers....the Transcript, Financaial Times, WSJ and SD Union Tribune have been critical to some of my content....all the best.....and like RR...keep the faith...Steve Austin, CPA...Managing Partner Swenson Advisors, LLP