Rancho Guajome adobe is a designated National Historic Landmark and something of a time capsule for San Diego history. The land was given as a wedding present to Ysadora Bandini and Cave Couts by her sister, Arcadia Bandini and her husband Abel Stearns.

The rancho remained in the Couts family until late in the 20th century when it became a county park. Restored to much of its original glory, the rambling 20 room house is furnished with period antiques and artifacts of its heyday. The docent tour takes visitors back to the days of the ranchos when cattle roamed the hills, and the rancho was the site of rodeos, fiestas and was visits by numerous dignitaries.

One of Guajome?s claims to fame is the hacienda?s connection to Helen Hunt Jackson and her famous novel, Ramona. Jackson stayed at Guajome while she was researching the novel and supposedly used Isadora de Bandini de Couts as a model for one of its characters. 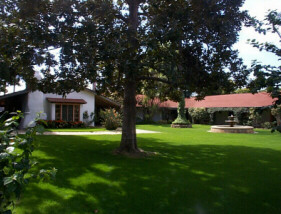 Rancho Buena Vista adobe is perhaps the best preserved of the California adobes since no significant modifications have been made in its 150 years plus. The original land grant rancho went thru several hands and was ultimately bought in 1866 by Cave Couts. In 1874, his widow, Ysadora, gave the land to their daughter Maria Antonia and Chalmers Scott as a wedding present.

Subsequent owners included Harry Pollard an MGM executive and silent screen star. Many movie stars visited during his ownership?1931-1950?including Joan Crawford who gave the Pollards the magnolia tree that stands today in the main courtyard.

In 1886, the Vista Land Company purchased much of the original land and began laying out what was to become the city of Vista. The city of Vista purchased the adobe and its surrounding eight acres in 1989 and opened it to the public.

Docents give guided tours and recount the tales of the days the adobe was home to the early Californios and its subsequent history. The site can also be rented for weddings and other events.