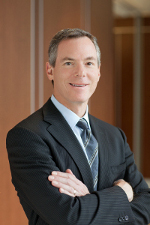 Paul Jacobs is no stranger to change.

As chief executive officer of wireless chipmaker Qualcomm Inc.
for the past nine years, he's helped changed how people communicate.

Jacobs will be stepping aside as Qualcomm's CEO early next year to focus on technology development and the company's strategic vision. He will remain as the company's executive chairman.

“I am very proud of what we have accomplished during my time as CEO and look forward to being part of the company’s continued success," Jacobs said in a press release announcing the move. "At its heart, Qualcomm is a company of inventors and entrepreneurs, and I’m excited by the opportunities that lay ahead as we continue to push the boundaries of technology in mobile and beyond.”

Jacobs has been continually recognized for his contribution to the world of innovation, and 2013 was no different.

He was honored with the 2013 Edison Achievement Award, which celebrates the positive influence the recipients have on existing, new and emerging markets, and the impact they have on the world.

Jacobs was honored for leading Qualcomm's efforts to develop and commercialize mobile technology breakthroughs, including the first smartphone based on Palm OS; inclusion of GPS capabilities in mobile phones; the Brew system, which enables over-the-air downloading of applications; voice over IP, push-to-talk systems; and advanced reflective display technology.

“[Jacob's] innovations have helped define the smartphone world that we live in today," Sherry Lansing, presiding director of Qualcomm’s board of directors and chair of its governance committee, said in a statement. "He has guided Qualcomm through extraordinary growth where the company’s market cap more than doubled, revenues more than quadrupled and GAAP EPS more than tripled during his tenure as CEO.”

In 2013, thanks in large part to Jacobs, Qualcomm received the Sesame Workshop's corporate leadership award for its commitment to leveraging the power of mobile technology to educate children around the globe in new, impactful ways.

Jacobs has been granted more than 45 patents for his inventions in the areas of wireless technology and devices.

Many organizations have called upon his leadership expertise. He is chairman of the U.S.-Korea Business Council and of the Advisory Board of the University of California, Berkeley, College of Engineering; vice chairman and co-owner of the NBA Sacramento Kings; Global eHealth Foundation Ambassador; a member of the International Business Council of the World Economic Forum; and a member of the US-India CEO Forum.

Jacobs received his bachelor's and master's degrees, as well as his doctorate in electrical engineering, from the University of California, Berkeley.

He joined Qualcomm, co-founded by his father Irwin, fulltime in 1990 as a development engineer, leading the mobile phone digital signal processor software team.

Under Jacobs, Qualcomm Consumer Products, before it was acquired by Kyocera Wireless in 2000, moved into the No. 2 CDMA handset supplier position in the United States.

Jacobs became Qualcomm's CEO in July 2005 and was appointed chairman in 2009.