In defense of the truth: Mirch Law takes on Goliath on behalf of David

By PADMA NAGAPPAN, Special to the Daily Transcript
Wednesday, July 16, 2008

If you have a business that's been defrauded by a big company and you want to go after them to ensure justice is served, you might want to have Kevin Mirch fighting for you.

There aren't too many attorneys who would accept cases that involve going up against influential heavyweights, but fear of repercussions has never stopped Mirch from seeking justice or being vociferous about it.

He started his own practice, Mirch Law, in 1989 in Reno, Nev., and is in the process of setting up offices in San Diego, along with his wife and partner, Marie Mirch. A prominent case he won recently involved Dr. James Forsythe, a veteran oncologist from Reno, accused of wrongly dispensing human growth hormones to patients.

Mirch subpoenaed high-profile witnesses, including the Nevada governor's wife, Dawn Gibbons. He proved that Forsythe had been prescribing an approved form of human growth hormones and that the criminal case was filed for political reasons.

He is now processing a complaint against the FDA and FBI for violating Forsythe's civil rights, when they forced their way into his home and held a gun to his mouth, using uncalled-for violence against a well-known, 69-year-old doctor who invited controversy because he combined homeopathic treatment with clinical oncology. 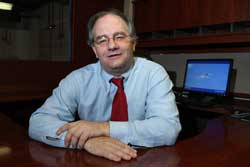 Many people predicted a jail term for Forsythe before he came to Mirch, who confidently assured his client that justice would prevail. And Mirch made sure it did.

Mirch graduated from the University of Santa Clara with a Juris Doctorate and from New York University with an advanced law degree in taxation. He began his career at Arthur Young, as a CPA and then practiced litigation law at Haase, Harris and Mirch. While there, his case load included defamation cases, defective construction and corruption in casinos.

He represented some of the biggest gamblers, and recalls winning a verdict of $8 million for a high roller who had been cheated by a casino. He and his partners tried cases in San Diego, San Jose, Orange County and Las Vegas.

He branched out on his own in 1989 and wife Marie joined him in 1998 as a partner. In 1999, they defended older homeowners in Reno being harassed by the developer that also ran the homeowners' association. The jury awarded the seniors $11.8 million in damages.

The Mirchs owned two casinos in Reno during the 1990s, an experience that made them very knowledgeable about gaming and casino management. They learned that it was very hard to obtain legal counsel, as well as prohibitively expensive -- fees often ranged from $300,000 to $400,000 per year.

So for their own law practice, they came up with a uniquely affordable fee system. They offer a contingency fee-based arrangement for clients.

"This allows the clients to know exactly what it is going to cost them at the outset," Mirch said.

This experience also gave them an intimate understanding of how software works and how some software vendors have been duping users by selling what is essentially "vaporware."

IGT, a vendor that sells the Acres software to casinos, had been pushing a suite of seven programs to casinos in Reno, but only two of those programs actually existed. Those two programs were not licensed by the Nevada Gaming Control Board and Nevada Gaming Commission, which is a requirement. The software was also faulty, in that it would either under pay or over pay the player.

Sienna Casino was one of the few casinos that wanted to pursue a case against IGT. Mirch sued IGT successfully for a verdict of $1.7 million, which with legal fees exceeded $2.5 million.

In San Diego, Mirch fought a case in 1995 for James Zebrowski, the owner of Super Shuttle. Another shuttle company was trying to take it over and infringing on the trademark name. Mirch got Super Shuttle an out-of-court settlement and the other company had to change its name to Cloud Nine. He also fought a case involving a shareholder lawsuit against a pharmaceutical major.

The Mirchs have five children, each pursuing different career paths. The family has suffered threats and harassment as a consequence of the cases Mirch has taken, waging a David vs. Goliath war on corruption and injustice.

"Our office was bombed in Reno in 1998, when we were trying a corruption case against a court reporter who was falsifying transcripts for her brother who was a politically influential attorney," Mirch said.

Asked if he ever got tired of fighting the big guys, Mirch answered, "I've taken on such cases because no one else would, and someone has to do this. I have a need to change things; it bothers me when the system abuses people."

For information about high-profile cases that made the news, visit www.mirchlaw.com. The number for the San Diego office is (619) 501-6220.