Food is Michael Antonorsi's life. Yet the president and master chocolatier of Chuao Chocolatier, based in Carlsbad, tapped into his culinary passion late in life.

Having earned a degree in engineering from UCSD, Antonorsi worked in telecommunications and computer networking for 14 years, before ultimately deciding to move to France and attend culinary school. Yet after deciding that the life of a restaurant chef wasn't the right fit for him, Antonorsi moved back to San Diego to start a business venture with his brother Richard.

With very little presence in the way of gourmet chocolate in San Diego, the Antonorsis saw the need for a more refined and adventurous type of chocolate maker in the region, and launched Chuao in 2002 in order to satisfy that need.

"In a way, when we started, we were pretty much the only chocolatier in San Diego," Antonorsi said. "In 2002, some initial effects started in some chocolate companies in other parts of the U.S. Since I am a chef, and it's what I like to do, with a passion, we always had a culinary approach to chocolates. We want to ... push the limits of the imagination, and that's how we finally came about. Our vision is to arouse the senses with unusual and unexpected chocolate experiences."

That vision of "unusual and unexpected chocolate experiences" starts with the chocolate itself. The Antonorsi brothers, who originally hail from Venezuela, use a blend of chocolate that features Venezuelan Trinitario cacao, which is more delicate and of higher quality than the higher-yield Forastero cacao that many other chocolatiers use. 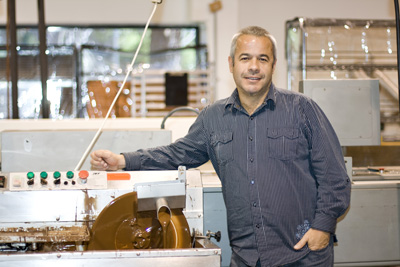 Michael Antonorsi is the president and master chocolatier of Chuao Chocolatier. Photo by Sarah Strong

"Chocolate in the past was mostly just a candy, and as the U.S. became wealthier, in a way, you started looking for better olive oils, better breads, better cheeses," Antonorsi said. "Any kind of food item was improving. More artisan, local farms, organic ... all those things were starting to blossom, and chocolate was not going to stay behind. So chocolate was also becoming more of an adult indulgence."

Chuao is still a reasonably small operation, comprising an administrative staff of 15, a production staff of another 15, and 20 retail employees split between three stores within the county, not to mention distribution through specialty stores such as Whole Foods and Bristol Farms. At one point, Chuao operated six retail locations, but closed three of them that weren't working out quite as well as their Encinitas, UTC and Del Mar locations. Antonorsi states that the whole process has been a learning experience, noting that when he and his brother started the company, they didn't even know how to operate a cash register. Piece by piece, the company has found new tactics that have proven successful over time, including introducing gelato during the summer. But he also acknowledges the challenges with competing against much bigger chocolatiers.

"We walked into a market that was just blossoming," Antonorsi said. "When we started, as we went, we were learning. So we started building knowledge about our own experience.

"The whole marketing issue has been a great learning curve. We're still working on discovering the code to make the product a success in the United States. It's a big country and you have to grow fast, and you have to get a lot of attention and a lot of brand recognition. We're fighting with Lindt and Ghirardelli and those guys who are less quality, but have huge brand awareness."

Part of what sets Chuao apart from its bigger rivals is its lineup of gourmet truffles and chocolate bars, which runs a diverse range of flavors. Some of its current selections include the Spicy Maya, infused with chiles and cayenne pepper, to the Panko, which features sea salt and toasted panko breadcrumbs, and the chipotle and popping rock candy surprise of the Firecracker. Each year, two or three new flavors enter the rotation, while another two or three become phased out. And Chuao also regularly introduces limited-time "Dare to be Different" bon-bons, which offer consumers entirely new flavor combinations that, if successful, become part of the product line.

As a chef who "only think(s) about food all the time," Antonorsi said he is constantly dreaming up new chocolate combinations.

"Every time I'm eating anything or looking at a cookbook or at a restaurant, I'm always trying to find new ingredients or experiences that I can translate back into chocolate," Antonorsi said. "So I find some crazy ingredient someplace and think, 'that could work really well with the chocolate.' So I start gathering all that information, and eventually I source it out and start playing with the combinations. I grab all the stuff, put it in my mouth, and if it doesn't work, I know immediately. If I feel that there's potential, then I start refining."

Finding the right balance between creating something unique and determining which products will be successful can be tricky, however. According to Antonorsi, it's important to pay attention to what the customer wants, while staying true to Chuao's vision.

"Staying in line with your values in the beginning, and not changing them as you go along is a key thing, because you start losing who you are if you start navigating with impulse from outside," Antonorsi said. "Pay attention to what people really want. Sometimes one of the mistakes is that you think this is great, but it's not really what people want.

"You have to pay more attention to what the consumer wants and needs, and try to line that up with what you want to make. And if it works, both are happy. But if you want to make something and they don't want to buy it, then you're wasting your time."

Chuao has introduced many delectable concoctions over the past decade, but inevitably, some experiments never graduate past the test phase. Some flavors, Antonorsi discovered through trial and error, don't complement each other that well.

"I love wasabi, I love how it gives you that sinus treatment, but I could never get it to work," Antonorsi said. "I was almost piping straight wasabi inside of chocolate. But the chocolate would tame it each time, and it would not allow you the sensorial experience that the wasabi does. And it tasted really odd, the combination of the wasabi and the chocolate. I did, once, rosemary buttercream with garlic caramel. And I thought it was delicious, and it was just by accident too. But afterwards, you had this little garlic memory coming back again, so it was confusing. If it's not going to be a delicious experience, I'm not going to do it just to grab attention or do something crazy.

"It's gotta be delicious at the end of the day. If it's not delicious, we're not doing our job."

Their firecracker chocolate is unparalleled: chipotle, sea salt, and pop rocks that let off little explosions when you crunch down on them. It's become my favorite chocolate of all time, for the fun and the flavor.

Chuao Chocolatier and what it means to me: It's the uniqueness and the most special unheard-of combinations that create a blend of outstanding pallet enhancing alluring cloak that creates the tingling constituently among the dancing taste buds!

AMAZING!!! Ever since I discovered Chuao Chocolatier, I've been a great fan and a repeat customer over and over again. For years I didn't even eat chocolate because it never tasted right and was full of artificial ingredients. However, in the pure form that Chef Michael prepares his chocolates I've come to see it as a healthy indulgence in moderation of course but not always possible. :) I love that they also serve gelato and coffee. I also just recently bought two bottles of wine to go along with my chocolate. I tell everyone I know about Chuao Chocolatier.