Urban redevelopment is an opportunity to breathe new life into San Diego, LWP Group's Greg Strangman says, but the city itself hasn't always been gung ho for the journey.

For many of his projects, the result of that tension has been a war of wills.

“It’s good to have conversation,” Strangman said. “I think that’s why we choose some of the things we do, to push it a little. To make it a little bit edgier.” 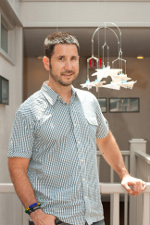 Strangman said the conservative thinking he finds himself fighting against is best exemplified by the decades-long controversy surrounding the “Eyes of Picasso” mural.

Chased from its downtown home in 1978 to make way for the Horton Plaza project, Mario Torero’s mural was greeted without welcome in a series of subsequent locations before it settled into its current Barrio Logan home.

"In any other city, that wouldn't have even been an issue," he said.

Similarly, he doesn’t see why his projects haven’t always been resoundingly approved by their soon-to-be neighbors.

“We like to pay homage to a neighborhood to the best of its ability,” Strangman said. “But for me most of what I do comes from other cities, what I see in other cities. I'm not afraid to put ourselves out there on an island of being forward thinking.”

Strangman's projects aren’t traditional, necessarily, but probably aren’t shocking to too many people, either.

Take the Pearl, a 23-room boutique hotel in Point Loma, for example. LWP acquired the former Sportsman’s Lodge Motel in 2006 and set about reinventing it. Unveiled in midsummer 2007, the finished product is striking compared to its previous state, but is hardly out of place in its neighborhood.

“It’s a very midcentury modern California, beachy feel to a certain extent, that is very appropriate to Point Loma, and there’s the Pearl name, with its proximity to the harbor,” Strangman said.

Michael Soriano, whose company onairos design collaborates with LWP Group, said Strangman isn’t one to back away from a challenge.

“The problem is, so often, we like to push the envelope, but we have to water things down a bit,” he said. “We shoot for things knowing that we’re going to get knocked down. He doesn’t get a lot of community support. How do you nuance the fact that at every turn, people think it’s too radical, and then at the end, people think it’s perfect? The Pearl is a perfect example. He’s recreating a down-turned property, you’d think they would be grateful.”

Soriano said it's exciting to work with a client who infuses himself into the creative process, making the project a truly cooperative endeavor.

LWP’s current priority is a brand of urban infill multifamily properties, or "boutique living" buildings, in the city's uptown neighborhoods, that it calls “Community.”

The first -- Community @ Martin Building -- opened a year ago in Bankers Hill and currently has a waiting list for new residents.

The 24 units in the building range in monthly rent from $800 to $1,100 and seek to make use of the smaller spaces with innovative design and by incorporating communal areas. The building has Wi-Fi, a community garden, rooftop pool, bike rentals and a concierge service.

Most residents voluntarily pay an additional $1 on their rent each month, matched by LWP, to Community Gives, an associated 501(c)3 that has raised $10,000 for area educational charities to date.

Once a month, LWP gives Community residents money for a group social function, such as a bike ride to a local bar for happy hour.

“I think on the residential end, with infill multifamily that we've developed, we’re ahead of the curve right now,” he said. “No one's really doing it like us.”

And while residents have seemingly embraced the concept, neighbors have also had a positive reaction to the property, once it was finally completed.

“Community at the Martin Building, that had nothing to do with that neighborhood,” he said. “Frankly, when we put some of that street mural on the building, I was scared that more conservative people in Bankers Hill would say, ‘Is this guy crazy, does he know where he is?’ But it was cool once we got it up, to see these two old ladies walking their dogs on the way to the park who were just so excited to see someone had done something different in their neighborhood.”

LWP is in escrow to buy the Carnegie Apartments on Ninth Avenue, which would become another Community-branded development. The company has also begun incorporating the live-work-play mantra into previous projects, such as the Scripps building downtown.

Eventually Strangman would like to open Community-branded properties in other cities, particularly New York and Los Angeles, where he’s already initiated preliminary conversations and searches for real estate. Ideally, each building would keep at least one fully furnished unit empty at all times, available at a discount to Community residents, or for anyone looking for an extended-stay alternative.

Strangman’s concept for Community was born out of necessity. (“Great design comes from boundaries,” he said.)

After completing the Pearl, Strangman initially wanted to pursue more opportunities in hospitality. By then, financing for hospitality projects had collapsed, along with the rest of the economy. Multifamily projects, meanwhile, were the strongest real estate investment vehicle, he said.

“There aren’t many people who are doing great residential spaces that people stop to look at and go, ‘Whoa, this 300-square-foot studio has a vegetable garden, these places, you can check out a bike, I’ve got Wi-Fi with my rent, I move in here and I get reusable grocery bags.’ It's the whole sensibility and the lifestyle that people are doing, and I think what we're doing is just going to get more and more prevalent. So, I think the timing is really, really good on it.”

People were changing the way they thought about what they want in a home, Strangman thought. He sought to develop properties that mirrored those changing attitudes.

"I'm not saying someone who's living in 3,000 feet is going to shrink down to 500 feet. But I think people are becoming a lot more sensible about the bigger city mentality, and it’s starting to take effect in San Diego. Having visited New York a lot, and recently visiting Tokyo, people utilize public spaces and open areas as their own backyards in a sense.”

Along with the value-added amenities that come with Community, it’s selling a basic lifestyle that’s been slow to develop in San Diego. Walkability, public transportation and everything that comes with those things -- thriving culinary scenes, coffee shops, boutique shopping -- haven’t traditionally been part of the car-loving, strip-mall-oriented San Diego development patterns.

“As a city, we didn't grow inward, we grew outward,” Strangman said. “We're starting to come inward because San Diego has a lot of transplants. The younger generation of people, they just expect it. If you're in San Francisco and you're moving to San Diego, you're not stoked to end up in EastLake or Scripps Ranch or Poway. You’re going to want a place that has an urban, invigorating location.”

Without a downtown to speak of until recently, San Diego didn’t have the culinary reputation that often drives traffic in urban neighborhoods. Like dense housing options, that’s something that had to develop as well.

“Ten years ago we didn't have all those lifestyle things outside of the living environments,” he said. “We had high-rise buildings but didn't have the culinary to go with it.”

That’s beginning to change, he said, particularly driven by the city’s craft beer culture. He predicts that San Diego Beer Week will be a major event for San Diego 10 years from now.

The Onyx Room, a nightclub in Gaslamp located underneath LWP’s offices, was one of the company’s early projects and gave Strangman a foothold in the hospitality arena. He’s also a silent partner in two restaurant/bar concepts currently in lease negotiations. Spearheaded by the group behind Craft and Commerce, the Noble Experiment and Neighborhood, one of the locations would open in Little Italy, and the other in North Park, probably sometime in the next year.

“I don’t want to be the operator of bars and restaurants at this moment,” he said. “But I’m excited about working with the group.”

Strangman’s preferences -- infill multifamily projects, urban nightlife endeavors -- coordinate nicely with the development buzzwords that have been floating around San Diego. The San Diego Association of Governments has said the region’s housing needs will have to be primarily met by urban infill and redevelopment projects in the coming decades. Similarly, those efforts will need to be concentrated along public transportation nodes, in walkable environments that are close to jobs.

That’d seem to position his company nicely. Strangman just hopes the broader San Diego community starts to be more open to that sort of development.

“People are so fearful of density,” he said. “To me density is good. Density creates energy. It creates life. It's not a bad thing.”

As far as North Park has come in recent years, Strangman said it has more room for continued development and should be an area of focus going forward. Similarly, Middletown, Barrio Logan, Sherman Heights, Five Points and Golden Hill are emerging areas with untapped potential, and he’s excited to see how they’ll continue to grow.

But he’d also like to see some changes in Ocean Beach, where he lives.

“I don't ever want it to lose its bohemian feel,” he said. “I think it's always going to be gritty, and I'd like it to stay that way, but I'd like it to get more refined like a Venice. It’d be nice if someone came along and sprinkled in more modern properties.”

I like this guys vision for San Diego. It is just what this city needs to become more vibrant and less one-dimensional. The reputation of San Diego has always been a beachy town , which is great and nothing needs to change about that, but it would be nice if we had an urban edge, too. Why shouldn't we have the best of both worlds? Good luck to Mr. Strangman, I for one, will be following his endeavors.