By THOR KAMBAN BIBERMAN, The Daily Transcript
Friday, May 4, 2012

Keith Jones, Ace Parking Management’s managing principal, would like to expand his downtown San Diego firm’s locations from 450 today to 1,000 across the country within the next seven years.

Jones, the grandson of both company founder Evan Jones and longtime civic and corporate figure and philanthropist Malin Burnham, handles the day-to-day operations of a firm with a payroll of more than 5,000 employees, about 2,300 of whom are in San Diego County.

The 450 surface and parking structure locations amount to 245,000 spaces, about a third of which are in the San Diego region and Southwest Riverside County. About 180 Ace-run lots and garages are in Southern California, of which more than 100 are located in this region.

Jones estimated his lots generated about $330 million in gross receipts last year, “of which we get a percentage.”

Jones' grandfather Evan, who founded the firm in 1950, died in the early 1990s, but his father Scott continues in an advisory capacity as owner and chairman after having spent 50 years in the parking business. Jones said his personality is low-key, much like his grandfather Evan, whereas his father Scott is much more of a Type A personality. Still, father and son discuss the direction of the business nearly every day. 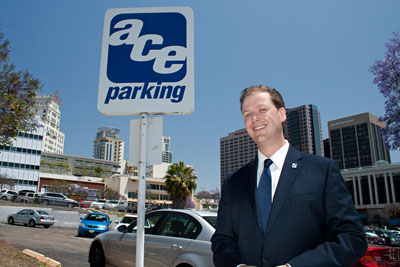 Jones has had to weather a recession — during which time the staff in the main office declined from 40 people to 28.

“All went very soft,” he recalled. “As the market has come back, it is coming back in a new way. We’re not hiring back to the same levels as before.”

While parking rates didn’t decline during the recession, Jones said they stagnated. He added that if he didn't charge the going rates, someone else would. What’s more, if the contract didn’t go to a company such as Ace, it might have gone to an out-of-state or foreign parking company such as European firms Vive la France or Vinci Park.

Jones said there may have been times when it was easier to sell out, but all three Jones generations have been dedicated to keeping Ace local.

“My father Scott knew that we would have to grow or we would be devoured by larger companies, and I decided we needed to go national,” Jones said.

Jones said knowing what to charge is a delicate balancing act. Charge too much and people will go elsewhere. Charge too little, and the lot will get too full.

He concedes that the 80 percent standard may not be workable in a community such as La Jolla.

“About a third of the cars driving in La Jolla have already arrived at their destination. They’re just looking for a place to park,” Jones said.

While Jones says his company, which claims it is the largest privately-held parking company in North America, is committed to remaining independent, he predicted there will be many more mergers and acquisitions in the industry. Examples include Ampco Parking Co.’s acquisition of Los Angeles-based Five Star Parking for an undisclosed sum in September 2010 and the $350 million acquisition of Nashville-based Central Parking by Chicago-based Standard Parking announced earlier this year.

“I view this as a positive thing,” Jones said. “It only makes my firm more unique.”

Jones said, unlike the major national or international firms, if someone calls with a problem at 5:15 p.m. on a Friday afternoon “we can still get it resolved that same day."

“I am the kind of person who likes to answer emails in the middle of the night,” Jones added.

He also is trying to put his company at the forefront of the future of the automobile by implementing a program to eventually place 10 plug-in electric car charging stations throughout downtown San Diego. The first of these is up and running at 1246 Fourth Ave.

As the vice chairman of the Downtown San Diego Partnership and a member of the Movement to the Middle campaign, Jones, an unabashed Nathan Fletcher supporter — has some definite ideas about his city and its direction. Put simply, he hates extreme positions on the right or the left.

“Why can’t you be worried about the environment and be concerned about taxes too?” he asked.

In March 2011, Ace, which has been the largest parking operator in San Diego for decades, reportedly became the largest parking company in Phoenix as well. It has the contract for the Phoenix International Airport along with other contracts in the desert city.

Also in March of last year, Ace announced it had expanded into Nebraska — making it the seventh state where the firm had gained a foothold.