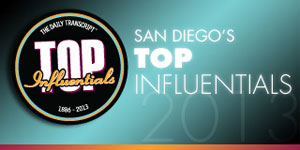 San Diego's Top Influentials highlights the Who's Who in San Diego business, profiling some of the top newsmakers of 2012. This year we focus on the leaders in Finance; Business Services; Health, Hospitality & Education; Technology & Energy; Real Estate & Construction.

Originally from Oslo, Norway, son of a Norwegian father and Canadian mother, Eric Ellingsen tells a classic American success story. As an international salesman, his father moved the family around a lot. Ellingsen spent his high school years in Venezuela and Montreal, Canada. He got his undergraduate degree from a regional college in Virginia and headed west in his early 20s to California, where he took an entry-level accounting position at California Bank & Trust in 1999. He got his MBA in 2005 from the University of California, Los Angeles, while still working for the bank. Now 36, he’s the bank’s chief financial officer.

Feb. 4, 2013 -- Reporter Doug Sherwin speaks with Steve Bernstein, president of business banking at Wells Fargo Bank, about whether big banks have learned their lesson after the recession and lending myths.

Feb. 3, 2013 -- Transcript reporter Doug Sherwin talks with Tom Garfinkel, San Diego Padres CEO and a 2013 Top Influential, about moving in the Petco Park fences, the team's uniform program with Little League teams, and a look at the upcoming Padres season.

Feb. 4, 2013 -- Doug Sherwin speaks with Teofla Rich, senior vice president and head of private banking at Torrey Pines Bank, about the recent consolidation in community banking, and how the third largest locally based bank in San Diego has been able to survive.

Feb. 4, 2013 -- Daily Transcript reporter Doug Sherwin speaks with Anthony Pico, chairman of the Viejas Tribal Council and a 2013 Top Influential, about the Viejas hotel scheduled to open in August and a renewed focus on guest services.