The Ballpark Village plan along Park Boulevard, once considered a no-go during the recession, appears poised for a resurrection.

That portion of the proposal -- which has evolved significantly during the past decade -- now calls for a 34-story tower and a six-story podium with 634 multifamily residential units comprised of 274 condominiums, 360 apartments, 52,000 square feet of retail and 1,240 spaces in a three-story underground parking garage. Carrier Johnson + Culture is the project's architect.

This portion of the plan would be situated on a 3.9-acre site near Petco Park bounded by Park Boulevard to the west, Imperial Avenue to the south, the trolley tracks to Library Circle/K Street to the north. 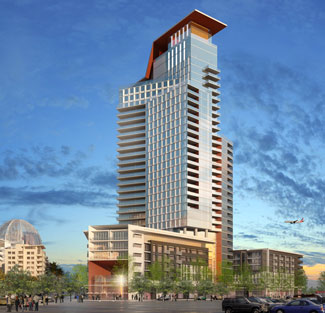 The proposal for Ballpark Village now calls for a 34-story tower and a six-story podium with 634 multifamily residential units, 52,000 square feet of retail and 1,240 spaces in a three-story underground parking garage. Photo courtesy of Carrier Johnson + Culture

The developers want some changes to city requirements for the site. The application proposes eliminating a required 10-foot building setback both along Park Boulevard and Imperial Avenue, the elimination of a required 15-foot setback along the L Street pedestrian walkway, the elimination of the required 20-foot setback along the 10th Avenue pedestrian walkway, and an increase in the proposed tower width from 100 to 110 feet.

Brad Richter, Civic San Diego assistant vice president of planning, said the developers -- who could not be reached for comment by press time -- hope to get the project under way by late next summer and will either build the development all at once, or will phase its components in depending on market forces.

Richter said the project is eligible for a $24 million state infrastructure grant to cover the cost of parking.

Back in 2005 the original development agreement required Ballpark Village LLC (Lennar and JMI) to construct 164 affordable units offsite if they couldn’t at Ballpark Village.

Richter noted that while these units were constructed at 16th Street and Market, Ballpark Village itself never was.

The adjacent parcel of Ballpark Village is shaped like a rectangle and was proposed for a 1,929-room Marriott (NYSE: MAR).

While this had been billed as the largest hotel proposal on the West Coast, neither the developer nor the operator could get past what were very uncertain economic times 4 ½ years ago. 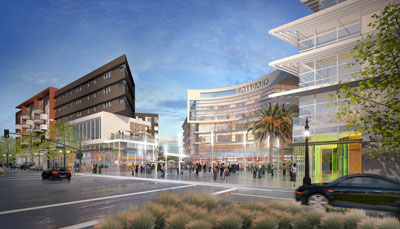 Ballpark Village would be situated on a 3.9-acre site near Petco Park bounded by Park Boulevard to the west, Imperial Avenue to the south, and the trolley tracks to Library Circle/K Street to the north. Photo courtesy of Carrier Johnson + Culture

When asked whether the parcel is still being considered for a hotel, Richter said any number of uses could still be constructed on that portion of the property.

Meanwhile, the project will go through numerous public hearings over the coming months.

First up will be a Downtown Community Planning Council meeting at 5:15 p.m. Tuesday, followed by one at an undetermined time during the Civic San Diego Real Estate Committee meeting on Wednesday.

Both meetings will be held in the Civic San Diego offices at 401 B St. Suite 400.

A final public hearing on the project is expected to be heard by Civic San Diego sometime this fall.

It’s great to see more amenities coming to the East Village! There is a growing density of works and additional retail amenities just make the CBD more dynamic.