Strategic Hotels & Resorts and its joint venture partner are selling the 419-room Hyatt Regency La Jolla for a reported $118 million.

The buyers, expected to close on the transaction sometime during the second quarter, are a joint venture of Walton Street Capital LLC of Chicago and JMA Ventures of San Francisco.

Walton Street has ownership interests in hotels such as the 190-room Park Hyatt in Avon, Colo., and the 62-room Ventana Inn in Big Sur.

Walton Street invests in a wide range of other types of assets as well. In San Diego County, the firm paid $71.12 million in 2012 to acquire a 73,000-square-foot building on Stowe Drive in Poway that is occupied by the Aldila company, which makes golf shafts.

JMA Ventures is developing a 250-room Kimpton Hotel in Sacramento, owns an inn in Lake Tahoe and is developing a timeshare property at Ghirardelli Square in San Francisco.

At the conclusion of the Hyatt Regency transaction, the Strategic/GIC joint venture will retire the $89.2 million in debt secured by the Hyatt.

"The sale of the Hyatt Regency La Jolla is consistent with our disciplined capital allocation strategy to divest non-core assets, and de-leverage the compnay's balance sheet," Raymond "Rip" Gellein, Strategic chairman and CEO, said in a statement. 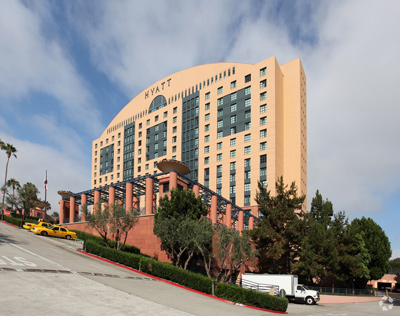 The Hyatt Regency, which Atlas Hospitality Group President Alan Reay said should be running at about a 75 percent occupancy rate (based on an approximately $200 room rate), was developed by Jack Naiman in 1990. He had already developed what is now known as the San Diego Tech Center in Sorrento Mesa by then.

Along with the hotel, the complex at the time included the adjacent 265,000-square-foot office building.

The hotel and the office complex were still joined when Naiman handed over controlling interest early in the 1990s. In 1994, his partner Shimuzu Land Corp. of Japan, defaulted on loans held by the Long Term Credit Bank of Japan.

Later in the 1990s, The Lend Lease Group, an Australian based-investment firm, acquired the property for $75 million from Long Term Credit Bank.

The Blackstone Group (NYSE: BX) eventually acquired the office portion of the development.

In 2007, Strategic Hotels announced that it closed escrow on a joint venture with GIC Real Estate that would acquire the Hyatt Regency La Jolla, plus a 792-room InterContinental Hotel in Chicago for a total of $450 million. Reay said that would place the Hyatt's value at $155 million in 2007.

Reay said he was actually surprised the Hyatt is selling for only $118 million in this transaction.

"It seems really low to me, especially what we have been seeing with regard to prices, lately," Reay said, adding that he might have expected the new joint venture to pay $170 million or about $400,000 per room, rather than what equates to about $285,000 per room.

Reay said the below-market price could be because Hyatt has a management contract that encumbers the hotel.

Hyatt co-seller Strategic Hotels paid $210 million in cash and assumed $475 million in debt to acquire the remaining 63.6 percent interest in the 757-room Hotel del Coronado from The Blackstone Group in May of last year.

Reay said based on a $512 million valuation, that transaction was the most expensive hotel sale in California last year.