Civic San Diego’s board on Wednesday approved a 24-story project of 220 residential units at Ash and Columbia streets in Little Italy.

A sleek tower with large expanses of glass and smooth plaster will be the most prominent element of 520 West Ash St.

The development by Lennar Multifamily Communities will contain close to 6,000 square feet of commercial space and 331 parking spaces. The two existing commercial buildings on the site, one with three stories and the other with a single story, will be demolished.

Carrier Johnson + Culture is the architect for the development that was approved by the Civic San Diego board on a 5-2 vote. Swinerton Builders is the general contractor.

The residential units will be market-rate and the developer will pay an estimated $2.1 million inclusionary housing fee.

Claudia Escala, an architect with Carrier Johnson, said she was unsure when construction will begin, but she anticipates it will take two years to complete the project once the work begins.

Civic San Diego Board Chair Jeff Gattas praised the project for seeking to achieve LEED Gold certification, among other features.

“This project is a beautiful project,” Gattas said. “It meets many of the things we have been striving for on this board.”

Some neighborhood residents had previously raised concerns about the potential aesthetic and environmental impacts if the three levels of above-grade parking were not sufficiently screened. 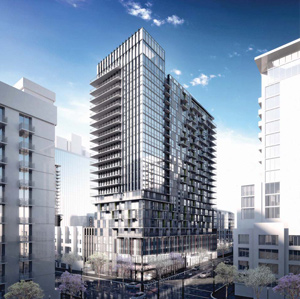 A rendering of 520 West Ash St., a 24-story project of 220 residential units at Ash and Columbia streets in Little Italy that was approved by Civic San Diego Wednesday. Image courtesy of Lennar Multifamily Communities/Carrier Johnson + Culture

"The choice to enclose and ventilate this garage makes eminent sense," Smith said.

Board members Murtaza Baxamusa and Robert Robinson voted against the project.

Robinson said he liked the proposed development, but criticized it for not providing any affordable housing.

“The problem that I have with it being a jewel project is the people that are less-than won’t have an opportunity to live in this jewel,” Robinson said.

Gattas responded that the inclusionary housing fee is set by the City Council, which limits what Civic San Diego can do to require on-site affordable housing for projects.

“Until the City Council decides to change that policy, we as a board here continue to be stuck, in the sense we can’t force developers to put the affordable housing in the units themselves,” he said.

The only member of the public to speak against the project was Kortney Oliver, owner of one the units in Acqua Vista, a residential development with two 18-story towers across the street from the project site.

Among a number of criticisms, Oliver said it was wrong that about 1,000 people — including those who purchased million-dollar penthouses — will lose their bay views when the 24-story tower is complete.

Oliver said she plans to appeal the approval to the city’s Planning Commission, which she must do within 10 business days.

Smith, from the San Diego Downtown Residents Group, said in an interview after the meeting that buyers of downtown property are told that their views of the bay are not protected.

The Downtown Community Planning Council voted 11-2 in favor of the 520 W. Ash project earlier this month.