Significant changes are happening in the Midway area -- that includes transforming the old Sharp Cabrillo Hospital property into a school, and converting the former post office at Midway and Rosecrans into a mixed-use development.

According to The Heritage Group, which has represented a number of these properties, the former Sharp Cabrillo Hospital property at 3425-3475 Kenyon St. at the edge of Point Loma will soon be turned into The Education First Language School.

Along with an English language school for foreign speakers, the property would also have student housing on the upper floors.

The Midway District boundaries include Interstate 8 to the north, Interstate 5 to the east, Laurel Street to the south and Rosecrans Street/Midway Drive to the west.

At the beginning of September, the school -- under the banner of Efekta Cabrillo Inc. -- paid $20 million for the former 226-bed, 173,845-square-foot, Sharp property that has several smaller buildings onsite.

The 47,880-square-foot Midway Medical Plaza office building at 3405 Kenyon St., surrounded by the old hospital property, is in a separate ownership but previously shared parking with the hospital. 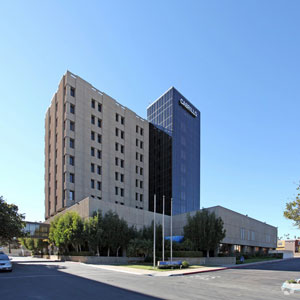 The former Sharp Cabrillo Hospital property at 3425-3475 Kenyon St. at the edge of Point Loma will soon be turned into The Education First Language School. Photo by CoStar Group

The property was sold by Greentree Family LLC, with Alan Kuebler of Kuebler Construction as its manager.

“There doesn’t appear to be any opposition to that project,” said Kyle Clark, Heritage Group senior director.

The new campus, which would be most active in the summer months, could host as many as 1,500 students.

The 6.35-acre project site is located on Kenyon Street. The majority of the property is still designated for institutional use by the Midway-Pacific Highway Corridor Community Plan.

Sharp Cabrillo was built as a 62-bed facility in 1958. The center was expanded in 1975, when a tower was added to house 200 additional beds. The hospital was purchased by Sharp in 1981 and remained open until the complex closed for good in early 1998.

Other new leases involve transforming the former 7,100-square-foot Tower Records building on Sports Arena Boulevard into the Rescue Mission Thrift Store, the 8,000-square-foot Discount Tire on Midway Drive, and the construction of a car wash on Rosecrans at Cauby Street that is slated to open soon.

Clark said the property at Kemper and Kenyon streets is to be developed as multi-tenant residential.

Elsewhere, Clark said The Heritage Group handled the sale of the 33,406-square-foot Midway Village strip center, in the 3100-block of Midway Drive, for $6.2 million last May.

“The buyers [Sunset Waste Holdings of Visalia] are working on enhancements for that property,” Clark said.

"The Midway District faced its challenges during the recession, including large vacancies, as well as many corresponding smaller vacancies," Clark said. "Circuit City, The Good Guys, Tower Records, Boat US, Marine Max, Midway Fitness all closed. Now, all of the spaces have been filled and more space will be constructed to add to the inventory."

First opened in 1966, the San Diego Sports Arena -- now the Valley View Casino Center, located at 3500 Sports Arena Blvd. -- was seen as a centerpiece for the Midway area.

The Valley View Casino Center, which run by AEG Management, San Diego, hosts an average of 160 events per year, and will introduce the San Diego Gulls this fall.

"We're in the midst of our best year to date," said Ernest Hahn II, an AEG San Diego partner who manages the arena. "Business is great and with the addition of the AHL Gulls, everyone is really excited."

The Gulls are expected to bring an additional 200,000 people to the Valley View Casino Center per year, which means that many more customers for existing businesses, Hahn said.

“The Midway District isn't without its challenges. There is a 30-foot height limit on the buildings, which attracts mostly big box retail uses,” Hahn said. “The ability to build different and significant projects in the area would be a better use of the space and draw more investment.”

Despite its challenges, "this area will continue to improve because of its many attractive attributes, including its central location," added Mark Hoekstra, managing director at The Heritage Group.