About one mile north of the U.S.-Mexico border, alongside an 8,000-foot runway, a barren, 65-acre piece of land surrounds a local airport control tower.

It’s not much to look at. All one can see from this airfield’s tarmac is dirt.

But city officials are hoping that developers will see something else here, at Otay Mesa’s Brown Field: opportunity.

For years, the land has gone undeveloped, beset by financing complications, community opposition and, some say, lackluster leadership.

Now, the city of San Diego is seeking developers with a track record in constructing “aviation-related facilities” to revitalize this 90-year-old airfield that one official described Thursday as “a diamond in the rough.” 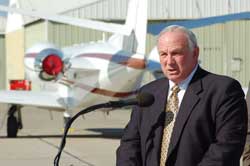 “Encouraging new development here at the airport represents an outstanding opportunity for creative and capable aviation related businesses,” Sanders said in a prepared statement. “And, best of all, the revenue generated by any new development here will help pay for much-needed revenues and upgrades to the existing buildings, runways and tarmac.”

At 880 acres, Brown Field is 25 percent larger than San Diego’s Lindbergh Field, and has long been touted as prime land for development. It handles more than 100,000 flights every year and serves as a Homeland Security Department checkpoint for trips in and out of Mexico.

The site houses a number of non-aviation related businesses including a junkyard and an auto storage facility. The leases from those businesses provide much-needed funding for the self-sustenance of the airfield, but the Federal Aviation Administration has expressed its concern about the tenants, threatening to pull federal grant money from the airport if they are not evicted. 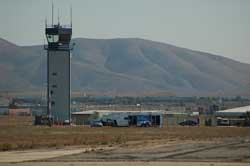 The city is looking for a developer that can help comply with the FAA’s wishes to bring more aviation-related business to the airport while bolstering Brown Field’s prowess and driving jobs and dollars to the region.

Numerous proposals to develop part of the airfield have surfaced throughout the years, but none have gained the community or political support necessary to see a project to fruition.

In the 1990s, the city embarked on a failed attempted to make Brown Field an international airport. Then, in 2001, the San Diego City Council shot down a plan to convert the airfield into a regional cargo hub.

Real Estate Assets Department Director James Barwick said that unlike past attempts to develop the airfield, “the timing is right” to seek developers because “the city has the will to move forward” with a project.

He said that what officials decide to do with the airfield will be of the utmost importance to the region as it continues to grow. The city council, Hueso said, should only approve a project if it will enhance the region’s assets and the airfield’s standing with the FAA.

The city has yet to receive any responses to its request for qualifications. It anticipates most developers will wait until Feb. 23, the deadline for submittals.

However, Christian Anderson, the city’s supervising property agent for Brown Field, said the city has received interest from “major aviation developers” to the RFQ, which was originally issued in late December. He said the press conference represented an effort to bring a wider range of qualified companies to the table.

After the city receives the responses, it will create a short list of qualified developers. Pending city council approval of a viable development partner, officials anticipate construction of new facilities to begin in February 2008.

It hopes to build facilities such as airport lounges, hangers, fueling stations and aircraft manufacturing and design plants. The RFQ emphasizes that while the city wants 65 acres developed “larger scale proposals are welcome.”