Kent Aden, Otay Ranch Co. executive vice president and this year's Pacific Coast Builders Conference chair, says despite a wave of foreclosures that has hit the South Bay hard, there are plenty of reasons to be optimistic.

"There were higher proportions of foreclosures in the South County because of a higher percentage of first-time homebuyers," Aden said.

Now, he says, not only have prices dropped greatly for the standard market rate units, those bank-owned properties are providing even better opportunities to a whole new generation of buyers.

"People are getting to buy where they just couldn't in the past," Aden said.

While he believes a full housing market recovery is a couple of years away, Aden said, "our company feels we're at or near the bottom."

The developer was also very encouraged at the Pacific Coast Builders Conference in San Francisco in June, where there were some 20,000 attendees. That made the event the fifth best-attended conference in the PCBC's 50-year history.

Aden is currently responsible for directing development operations for a 7,500-acre portion of Otay Ranch calling for a 15,000-unit build out. Otay Ranch, which has more than 19,000 acres overall, will have more than 27,000 units upon completion. 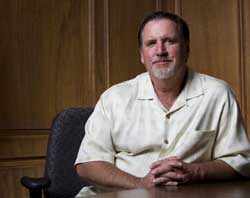 "We're restarting a couple of new home projects that we've had on hold for the past year and a half," Aden said.

These two projects are being developed by Otay Ranch related entities. One will be a 150-unit triplex condominium complex. The other will be a detached home development, also containing about 150 units. While many projects at Otay Ranch are developed by Baldwin-affiliated entities, the master plan has numerous guest builders as well. These also include some apartment projects now emerging from the ground.

The Otay Ranch units range from modest apartments with subsidized rents to sprawling homes priced at more than $1 million. More than half of Otay Ranch will be left in permanent open space.

Aden, who helped move the dirt that will have led to the construction of more than 21,000 units in South San Diego County, spent 10 years as vice president of community development for The EastLake Co. (where about 9,000 units were built).

Aden, who actually began his career as a Newport Beach architect, said he was fortunate that in both the cases of EastLake and Otay Ranch, he found Chula Vista to be supportive of the respective projects.

There are other parallels between the two communities. Both suffered significant downturns. In fact, the South Bay as a whole is still dealing with a wave of foreclosures.

The journey hasn't been easy. Aden noted how many of the national builders, such as KB Home and William Lyon Homes have closed their offices here.

"The large, publicly-held companies are leaving the region and I don't think they'll ever be back," Aden said. "Instead of 40 builders like we had at EastLake, there are eight or 10 at Otay Ranch."

Aden added that half of those are Baldwin subsidiaries, which own Otay Ranch through numerous partnership entities that had to fight through some very lean times in the 1990s as well as today.

One major difference from when Aden was working at EastLake is the size of the phases. He can recall a time when there were not only 25 or even 40 homes in a phase, they might open that many escrows in a single day. Today, phases are generally no larger than 10 units and the opened escrows are being recorded at the rate of half a unit per project per week.

Given that slow pace, Aden says it could be 20 years before Otay Ranch is built out.

Otay Ranch features multiple villages. Each of these features or is planned to include a private swim club for the exclusive use of village residents and their guests. Swim clubs feature a junior Olympic-sized pool, a children's wading pool and restroom facilities. Some also have a meeting room. Otay Ranch's newest facility, Hillsborough Swim Club, also includes sand volleyball, basketball courts, two tot lots and a large lawn area.

Each of Otay Ranch's villages includes one or more parks, such as the 10-acre Heritage Park. Opened in 2002, the park features a pond, an outdoor amphitheater, tot lots, picnic shelters and multi-use lawn areas, and a community center for classes and special events.

Aden said homebuilders have been forced to become smarter to survive. This doesn't only mean employing smart growth concepts with housing and amenities in proximity, it also means building smaller phases and limiting infrastructure expenditures until they are absolutely needed.

Aden added that a more judicious use of employee time is another key strategy for a homebuilder's success. By moving many of Otay Ranch's 16 employees from development to forward planning, the firm has been able to avoid layoffs.

"And Chula Vista is eager to process plans," Aden said.

A past president of the Building Industry Association of San Diego County, Aden is serving as board secretary for the San Diego International Sports Council, which promotes amateur and professional sports for economic benefit in the San Diego region. Additionally, he was recently awarded the City of Hope "Spirit of Life" award by the Construction Industries Alliance.