By THOR KAMBAN BIBERMAN, The Daily Transcript
Friday, May 7, 2010

Wood, who formerly worked as a vice president of real estate development for Opus West Corp., said he currently has an office of 31 brokers and eight support staff.

"We're looking to grow the office back to 40 to 45 brokers. We want to get some real producers," Wood said.

Wood said Newport Beach-based Voit has approximately 102 brokers companywide. The firm, which also has offices in Irvine, Anaheim and Las Vegas, is in the process of opening a Sacramento office, and is looking at the Los Angeles basin and Phoenix as well.

"We were nominally profitable in 2009, which is a tremendous testament to the quality of our people," Wood said. 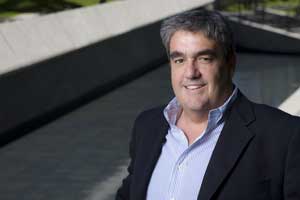 As for his assessment of the economy, Wood believes the commercial real estate market has bottomed out.

"We're going to bounce along the bottom for a year or a year and a half," Wood said. "We're starting to see larger leases now. Bigger companies are trying to lock in longer terms."

Wood noted that American Specialty Healthplans will be departing 777 Front St. (formerly known as the Paladion) to go into 189,000 square feet in Wateridge Plaza in Sorrento Mesa next fall, but believes the Front Street property can get refilled fairly quickly.

"I love that building. I'll bet you'll be able to find someone to take that space," Wood said.

Other tenants are vacating some space to go into another. Nokia is vacating 323,275 square feet to go into the smaller 196,742-square-foot Summit at Rancho Bernardo space. Wood said Bridgepoint Education (NYSE: BPI) or another big-name tenant will likely step up soon to fill that space.

"This shows a lot of good activity," Wood said.

That said, Wood said that if sublease space is included, San Diego still has a roughly 20 percent vacancy rate, which translates to millions of square feet of empty space.

The good news, Wood said, is office properties from Rio Vista and 1450 Frazee Road in Mission Valley to Hacienda del Mar in Del Mar are starting to sell again.

"The gap between buyer and seller has closed significantly," he said. "We had something like 20-plus offers on the 1450 Frazee Building.

"We're starting to see that despite what has happened, loans are going to get paid off, and I think we're going to see a lot more investment sales from now until the end of the year," Wood said.

Wood added that while the estimated $1.7 trillion worth of maturing commercial mortgage-backed securities debt is a problem he doesn't expects a tidal wave of defaults.

On the retail side, Wood said consumers are starting to spend again, but with Linens N' Things, Circuit City and Mervyn's having departed, Saks (NYSE: SKS) leaving and Blockbuster and Hollywood Video stores going dark at an ever-increasing clip, keeping spaces filled remains a challenge.

In Carmel Mountain Ranch the answer became a Sprouts market, but refilling an old Mervyn's space nearby has proven to be much more problematic.

As for industrial, with submarkets like Otay Mesa, which has about 3.5 million square feet of see-through space, Wood said he expects it will be six to 12 months before there is an appreciable turnaround.

Send your comments to biberman@sddt.com