First, Frager made right choice, then stayed focused on the positives

By TONY LOVITT, SPECIAL TO THE DAILY TRANSCRIPT
Monday, August 5, 2013

John Frager remembers pondering three job opportunities when he came out of the Navy in 1986: a pharmaceutical sales position, with the best salary of the three, but at an undisclosed city somewhere in the West; a $25,000-per-year job at a New York stock brokerage with a two-year training program on Wall Street; and an entry-level opportunity in the research department of CBRE in San Diego, starting at $14,000 per year.

“I checked on the pay thing and found that, $14,000 will take you a lot further in San Diego than $25,000 would in New York, and the weather is a hell of a lot better,” said Frager, who eschewed the Big Apple in favor of remaining in San Diego and starting at the bottom with CBRE (NYSE: CBG).

About 25 years later, with a few stops in between and thousands of miles of business travel under his belt, Frager returned to CBRE in San Diego.

In December 2011, his career had come full circle. He was at the top, named CBRE's executive managing director for the San Diego region. 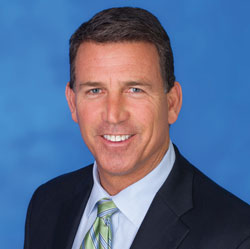 John Frager, now CBRE's executive managing director for the San Diego region, began his journey with CBRE by taking an entry-level opportunity in the research department in San Diego, starting at $14,000 per year. Courtesy photo

Born in Boulder, Colo., Frager and his parents moved to San Diego when he was a year old.

Technically, he can't be called a San Diego native, but ... darn close. The 6-foot-7½-inch Frager has seen a lot of growth over the years, personally and professionally.

“We used to go – I called it 'tweety bird hunting' – but we were shooting at beer bottles with shotguns out in Carmel Valley when we were in high school,” recalled Frager, a graduate of La Jolla High School. “There was just nothing there.”

“We've been at this healthy pace of growth. It hasn't gotten overheated and I think that's good for commercial real estate,” said Frager, assessing the state of San Diego's commercial real estate market. “I think the drivers of the economy are there. I don't see them slowing down and nobody can beat us in terms of quality of life and the weather. So, I think that's a great combination.” 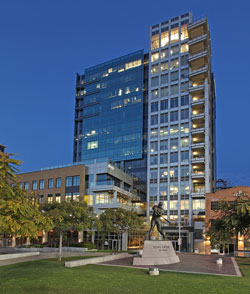 “Obviously, [the survey results are] huge for San Diego," Frager said. "It just shows us being a center of excellence as a part of the Southern California region for the UAV [unmanned drone production, supporting 7,000 jobs in San Diego]. And [San Diego now has] the largest military presence in the world. Biotech is just really exciting, too. We're just very fortunate if you look at the kind of square footage that these [defense, military, biotech and research] companies are occupying in San Diego and the types of jobs they're supporting.”

“At 7.1 percent, San Diego's retail vacancy rate is among the lowest in the nation. The national average for retail vacancy is 9.4 percent,” Frager said. “And office construction is way up after being non-existent since the recession.”

He said that of 907,000 square feet of total office space under construction, 872,000 square feet was for build-to-suit projects (such as LPL, Latham and Watkins and the FBI).

On the downside, Frager said that even though the Class B office market fundamentals are improving, occupancy rates still need to improve significantly to reach pre-recession highs.

“But, the San Diego real estate market is showing positive signs in most markets and product types," Frager said. "The small pockets of weakness are outweighed by the positives.”

Clearly, John Frager is one of those positives.


Lovitt is a freelance writer based in La Jolla.