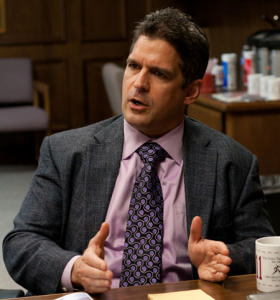 Editor's note: The following article is part of an ongoing series looking at the effects of sequestration.

Defense industry professionals are in the midst of diluting the toxic combination of rising health care costs and sequestration.

Staying informed on the latest regulations and including employees in the decision-making process is key, according to a group of defense industry executives at a recent roundtable at The Daily Transcript sponsored by Intercare.

“Being armed with information is really the best position you can be in and sharing that with the workforce then makes a difficult transition a little easier,” said Brandon Willenberg, associate at Mintz Levin Cohn, Ferris, Glovsky and Popeo P.C.

"Even in non-sequestration types of environments, we face this annual challenge as we determine how best we are going to be able to deal with the ever-increasing cost of health care coverage," he said.

Sequestration creates an extra overlay of negativity and uncertainty, and the effects of those federal budget cuts have yet to trickle down and settle in on a local level.

“The current mix we have right now is something that we continuously have to look at almost first because frankly the options are very limited as to how we are able to deal with this,” he said.

Uncertainty over health care is increasing over time, points out Jamie Moraga, president of Intellisolutions Inc.

The Affordable Care Act — or Obama Care — kicks in on Jan. 1 for companies with 50 or more employees.

“So that adds another level of cost. A lot of companies don’t know how they will be affected until it hits in January," Moraga said. "It’s something you have to consider, whether you are small, medium or large.”

The headache has caused companies, particularly smaller ones, to shuffle around priorities to figure out how to best control health care costs.

“No longer can we be proactive and focus on things we should be focusing on to get ahead in the marketplace," said Will Nevilles, senior vice president of Indus Technology Inc. "We are basically hunkered down, in survival mode, trying to defend the uncertainty.”

Health care in of itself is a personal decision, but more might opt to have a plan down the line due to rising penalties.

Under Obamacare, companies with more than 50 full-time equivalent employees have to offer health insurance or else there will be a $2,000 penalty per person, which is not tax-deductable.

“At some point it becomes more beneficial to offer them some coverage of some kind, even if it’s a low plan, because you are adding another $2,000 on costs and getting nothing for it,” said Linda Keller, executive vice president of consulting and account management at Intercare.

Young and healthy employees who want to opt out of health care coverage might take the individual penalty, because the fee isn't that high yet.

"It's not prohibitive enough yet. That penalty goes up incrementally every year,” Keller said. “More people will say, thanks but I have to have benefits.”

Willenberg has been taking calls from concerned government contracting clients that are trying to weigh their options in the face of new regulations coming down the pipeline.

“As funding goes away for particular contracts, they don’t want to lose top talent to competitors,” he said. “They are looking at furlough options and renegotiating contracts for this short period of time."

Another option is to lower salaries temporarily and bump them back up as conditions improve.

"It's tough and decisions have to be made," he said.

Carl Caskey, director of DCS Corp., said his 1,000-person company began prepping for the impacts of sequestration more than a year ago.

That meant looking at its entire fringe benefit package, which includes perks like paid holidays.

He continuously sends out surveys to all employees to gauge their desires.

“They are intimately involved in the decision,” he said.

When a Mintz Levin client was considering furloughs and a reduction in pay, they roped employees into the conversation.

“That was constructive and they learned a lot about what they can cut and what [employees] really value,” Willenberg said.

Another benefit of transparency is the employees realize their opinions are valued and that can help retain top talent, Willenberg added.

Small sacrifices employees are willing to make, like forgoing free sodas in the machine at work, can add up fast in big cost savings for a company.

Health care costs are carried by the company during the duration of a furlough, said Eric Lester, principal at Booz Allen.

"On a microscale that is an option but on a broadbased scale, like a federal sequester, that becomes problematic," he said. "Health care costs, whether we like it or not, are part of that calculus and how we support that decision-making."