The good and bad of defense legacy systems

“If you buy a brand new house, sometimes you move in your old furniture,” said Dave Grundies, president of GET Engineering, at a recent defense roundtable at The Daily Transcript.

In this case, that house is a state-of-the-art littoral combat ship or DDG Zumwalt-class destroyer or an unmanned aerial vehicle, and the old furniture is onboard systems such as the Navy Tactical Data System or Navigation Sensor System Interface, which have been used for decades.

The older systems still serve their purpose, but create training and variance gaps that a declining budget environment is only apt to widen.

“The fact that there are these old systems on there that need to be maintained and need to be operated along with the brand new systems that are put on there kind of pulls the sailor in a couple directions,” Grundies said.

“You’ve got the old guard who grew up with the old stuff and are just getting used to the new stuff, and vice versa with the new sailor who’s really savvy with the new technology and capability … but might be having a little trouble dealing with the old systems.”

“Legacy systems, with some exceptions, are for probably the next decade the future of the services, budget-wise at least,” Cain said. “And the area or geographic region that offers a lot in that aspect of the defense business I think is where San Diego is.”

This isn’t to say that the new ships, systems and platforms in the Department of the Navy’s fiscal year 2015 plan — LCS, DDG and the replacement of 14 Ohio-class submarines — won’t go forward as planned, but rather that research and development on not-yet envisioned weapons systems and platforms may be placed on the back burner, opting to upgrade instead, at least from the industry perspective. 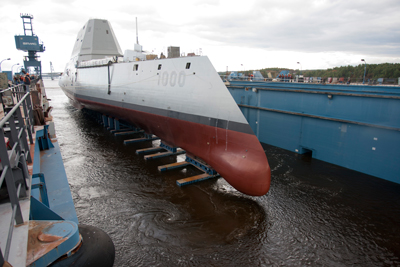 The USS Zumwalt is the first in a class of three revolutionary U.S. Navy vessels known as the DDG 1000. General Dynamics photo/U.S. Navy

“We’re not building much in new things; it just isn’t going to happen because the money’s not there, it’s not where the budgets are. So what we’re going to do is incrementally improve legacy systems,” said Randy Brandenburg, director of integrated mission systems at Raytheon, which is responsible for many of the cutting-edge technical aspects of the Zumwalt ships.

“Even on a platform like the 1000, we have a number of legacy systems for affordability, for capability, that integrate right in there with the new things. … There are a lot of new things, but there are a lot of legacy things that work great for exactly what the Navy needs, and they’re on great growth paths for the future, so there’s no need to build a new one.”

One area where this doesn’t hold true, and where the variance is, perhaps counterintuitively, a benefit, is in cybersecurity.

“One of the things legacy systems have that we overlook is security through obscurity,” said Eric Basu, CEO of Sentek Consulting.

“Right now, if you’re trying to hack a number of legacy systems … you have to actually have a number of people who are skilled in very obscure different systems. I mean it’s ironic and it was not intentional, but there’s an amount of layered security because the systems are so disparate.”

Basu said nearly every newer system uses the same networks and the same protocols, which may make training and integration easier, but also make hacking easier and the need for cybersecurity more vital. Systems now have security engineered into the product from the beginning and this was not always the case.

“I think the Navy is awakening to the fact that cybersecurity is a warfighter issue,” said Jim Loiselle, West Coast director for the Navy and Marine Corps Division within AT&T Government Solutions.

“You go back several years and the warfighter would say, ‘OK, I’ll go out and put bombs on targets,’ and somebody else is concerned about whether it works, whether there’s bugs in the system, whether the system is safe or not.

"I think the big recognition within the Navy in the last few years is that cyber is a major issue. The warfighter has to be concerned about it; it is his problem, too. And it’s not just somebody sitting back at SPAWAR in a corner that has to worry about cybersecurity and information assurance.”

This has opened the door for greater partnership between the relative newcomers to the military and the commercial side, which has been working on security solutions for decades.

“Now we’re a little less reticent to borrow the commercial off-the-shelf stuff,” Grundies said. “Of course it’s got to be a little more hardened to live in a military environment, but there’s a big learning release between the commercial to the government side, much more now than there has been in the past because of the capabilities.

"They’ve been fighting it longer than the military has. Do we start at ground zero or do we go to someplace where people have been doing this for a while?”

While Basu said San Diego has become a hub for security engineering, with SPAWAR and private-sector dominance in communications, there is a serious lack of talent.

“We can’t find anybody here in San Diego — I’m talking about actual penetration testers and security engineers — we have to go outside to Austin. There’s an awful lot of talent there,” Basu said.

“For the kind of straight-stick engineering we find over at SPAWAR, there’s actually a plethora on the market right now, so it’s dropping down salaries and making it a little easier to hire, I think.”

This collaboration between commercial and government partners is necessary far beyond cybersecurity. It extends all the way to ensuring that the proper weapons systems and upgrades for the nation’s and world’s defense needs are chosen in the requirement process.

“It’s understanding OK, where are you — you’ve got a system now, what are you looking to improve on it? Or do you have a new system you want to start?

“I think we all agree that those new starts are going to be few and far between, but as you have systems, the legacy systems and otherwise, you need to make those changes and improvements. And it could be small, from a chip, to a large replacement, but you want to understand, OK, what can we offer that’s going to make that better?”

All roundtable participants agreed that even in tight budgets, San Diego will continue to play an important role in these discussions.

“I think the future of San Diego is pretty good, but pretty good may be neutral,” Loiselle said, adding that with the rebalance to the Pacific, San Diego should avoid the exodus of personnel and commands that other geographic areas may experience. But that doesn’t mean profits will be soaring.

“Flat is the new up,” said Eric MacGregor, senior vice president for the eastern region of Indus Technology. “We managed to get lean and as efficient as possible, and are just kind of hunkering down for when that pendulum does swing.”