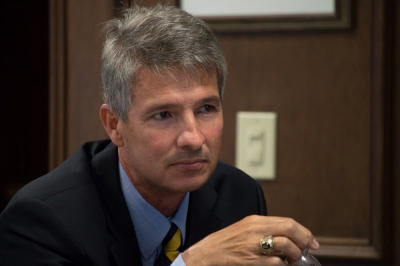 Training veterans to conduct a productive job search, equipping them with new skills and connecting them with small businesses are among the ways to help military members transition into the civilian workforce, according to a recent Daily Transcript executive roundtable sponsored by the San Diego Society for Human Resource Management, or SHRM.

Unemployment is a big concern for every segment in the United States, which is still working itself out of the Great Recession, but especially for former members of the armed forces.

"Even if the veteran unemployment was slightly lower, it's still a concern because that group is the most highly employable, highly skilled, highly motivated group of Americans we have," said San Diego's Trevor Blair, director of human resources for staffing service Manpower (NYSE: MAN). "Their unemployment rate should be dramatically lower than the general population.”

"There's a huge repository of good will (for veterans) right now, but how long is that going to last? Other causes may crowd it out. We're still riding that post-9/11, super-patriotic, military support wave, so we really need to find effective transition mechanisms now while we have that momentum behind us."

"They've developed critical skills during their service time — skills the taxpayer has theoretically paid for," he said. "It's almost a waste of resources."

One of the reasons for the unemployment gap is that former service members have a hard time finding job openings, and small businesses are equally challenged in finding the job-seeking veteran, said James Lasswell, president of defense contractor Indus Technology Inc.

He said would like to see some sort of a centralized job board for veterans.

"Small businesses don't know how to tap into the big pool of qualified people that we have here (in San Diego) that are veterans," Harken said. "I think the message of 'We need to help veterans,' is out there. The real problem is getting all these people qualified."

Rep. Scott Peters (D-San Diego) said efforts are already being made to create a central hub for job-seeking veterans. Manpower and Easter Seals recently helped launch the Military Transition Support Project (MTSP), which puts all the interested stakeholders at one table.

It gives new veterans — who need a job, job training or career advice — one place they can go right after separating from the military. The group already has received a $1 million grant from Blue Shield.

"It fills the gap between transitioning veterans and the resources on the outside, particularly employment, but also housing, mental health services, health care," said Manpower's Blair. "It's actually proactively reaching across the blue line and moving them into what they need."

The San Diego Regional Chamber of Commerce is taking an active role in solving the veteran employment problem as well, said Jerry Sanders, the group's president and CEO.

The Chamber has begun working with the San Diego Military Advisory Council and formed a military affairs committee to focus on veterans.

"People call and say, 'I want to hire a veteran, but I can't find one,' " Sanders said. "What we have are two groups that both want each other, and they don't know how to get in contact with each other."

San Diego International Airport has a scholarship program for veterans, in which the former service member is hired for a six-month appointment — much like an internship — during which they work at jobs that could turn into full-time employment.

The airport looks at where they might have future needs and assigns incoming veterans with the right responsibilities.

"It's a chance for us to prequalify them and get them to work with our teammates," said Kurt Gering of the San Diego County Regional Airport Authority. "But more importantly, they're out there in the talent pool. We've built our success metrics on helping to place them, with us or with someone else."

The panelists agreed that one of the best ways to help veterans get jobs is help them look for employment on their own.

They need to learn the art of networking and how to research a company before an interview, panelists agreed.

"They need to be able to take ownership of their own career and land that first job," Blair said. "We need to give them those tools."

John Funk, director of operations at Easter Seals, said part of that means managing the job expectations of a new veteran.

"I was captain of a warship in San Diego," Funk said. "I'm not going to be the CEO of an equivalent-sized organization as soon as I walk out.

Military MOJO's Dana said the demand signals in San Diego are not promising, however, which is part of the problem. The largest need in San Diego County is software developers — 5,800 openings, according to Software Council of San Diego.

"The jobs that my father grew up on, and got, after the military were focused on the competencies and the reason why everybody would hire a veteran," Dana said. "Brick-and-mortar retail, supply chain, blue collar — those jobs at a national, and definitely a regional, level are declining at double-digit rates. Meantime, you have software, tech, bio and bioinformatics growing in the opposite directions. You have this huge double-digit gap."

He attributes that to a weakness in local educational institutions.

"There's no academic institution that's anchoring the talent pool here in San Diego needed for companies like Active (NYSE: ACTV), Cricket, Websense (Nasdaq: WBSN), Thermo Fisher (NYSE: TMO) to stay in the county," Dana said. "To me, there's no generation of tech talent that veterans can come through and be competitive and remain in the area."

But not all the news is grim.

George Arthur, CEO of CaVU Consulting, said 75 percent of his workforce is made up of veterans, and it happened unintentionally.

"I just look for the best athlete for whatever open position that I have," he said, comparing his approach to a football team drafting players. "We're very nonbiased in that way. I think it speaks a lot to the quality of people we have transitioning.

"There are plenty of good qualified veterans out there. We've managed to find many of them and hire them. It's a statement to what that pool is."