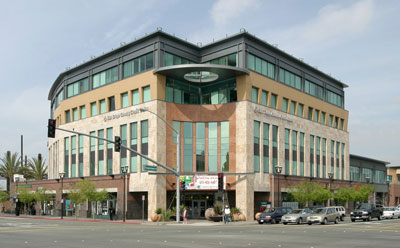 James Pieri Sr.’s Mountain West Real Estate firm developed the two-building, 232,000-square-foot Gateway Chula Vista I and II office complex on H Street, only to sell one and lose the other to foreclosure. Now, he has repurchased the building he sold nine years ago.

Tom Axson, a Mountain West senior vice president, said his firm wasn’t the only one trying to buy the nearly full property. The building is 97 percent leased.

“Someone else was trying to buy the building,” said Axson without elaborating further. “We were lucky to get it.”

The seller was Vera Guerin of Beverly Hills as trustee of a personal trust.

Major tenants in Gateway Chula Vista I include United States Probation Office and the County of San Diego.

The county's lease for 40,000 square feet last year was a huge boost for the property, bringing it to more than the 94 percent level.

At the time of the foreclosure in December 2011, Mountain West was in default on a $33.4 million Bank of America (NYSE: BAC) loan that had ballooned to $45.74 million before the lender took the property back for $19.5 million.

He didn’t say whether or not his firm is interested in reacquiring that property.

The current owner of the property is U.S. Bank NA (NYSE: USB), as successor in interest to Bank of America (NYSE: BAC) and a series of Wachovia Bank pass through certificates.

The CoStar Group pegged the vacancy rate at Gateway II, which has about 22,000 square feet of ground floor retail space, at 19.7 percent within the past month.

Colliers International is representing the Gateway II. Karen Johnson, a Colliers associate vice president, who along with associates Derek Applbaum and Derek Hulse is handling leasing for the property, said workout firm LNR Partners wants to stabilize the property before arranging to sell it.

In the meantime, Johnson said there has been a lot prospective tenant interest for Gateway II.

“There’s been a lot of activity. There’s a full floor user (about 15,000 square feet) that were in negotiations with and a lease is out for signature for a restaurant to move into the retail space,” Johnson said, adding that the former tenant, L&L Hawaiian Barbecue has been gone from that space for more than a year.

As for who might like to buy the Gatweay II when the time comes, LNR may not have to look any further than Mountain West next door.