Activity in San Ysidro’s retail market is heating up as one center has sold, another is about to emerge and the largest, Las Americas Shopping Center, is virtually 100 percent full.

The buyer of the 11-building property was Columbia, Mo.-based TKG Management. Repeated calls to the buyer were not returned.

The seller was represented by Michael Moser, Preston Fetrow, and Todd Goodman of CBRE (NYSE: CBG). The seller represented itself. 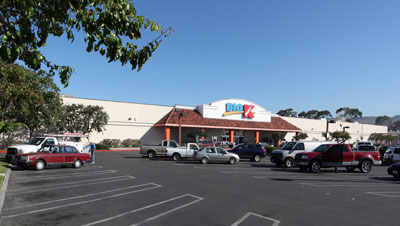 Originally built as the neighborhood Plaza Mayor Shopping Center in the 1970s, the property was redeveloped by what was Burnham Pacific Properties REIT in the late 1980s as the San Diego Factory Outlet Center.

As the San Diego Factory Outlet Center, the property found itself competing head to head with Las Americas outlet center directly across Camino de la Plaza in the 1990s, it needed to be transformed again.

Gradually, what became San Ysidro Village evolved into a more traditional center; which is now about 98.5 percent leased according to a CBRE promotional flyer on the project.

A CBRE flier on San Ysidro Village said the sales volume on the Ross Dress for Less store is $885-per-square-foot annually, or about 162 percent higher than the chain average of $338-per-square-foot.

Moser noted that Ross was so confident in the San Ysidro market that it placed another store nearby at the newly opened 98,000-square-foot Plaza at the Border retail center by the Shamrock Group LLC, at the junction of Camino de la Plaza and Sipes Drive.

The property was also originally envisioned as a subsequent phase of Las Americas Shopping Center.

“It’s a testimony to the strength of this market that there are two Rosses a block and a half apart,” Moser said, adding that at least half of these shoppers are coming from Mexico.

Moser said about 15,000 square feet is available at Plaza at the Border, and that he expects it to fill quickly.

That property has TJ Maxx, Ulta Cosmetics and Fashion Q along with Ross.

Shamrock is also the developer of the planned 133,200-square-foot Outlets at the Border outlet center on a 10.7-acre parcel at the border end of Virginia Avenue.

Randy Levinson, a Shamrock Group partner, who expects ground to be broken for Outlets at the Border within the next 30 days, said he expects that property to be filled before its opening date next year.

Levinson, who said there are leases out for signature that would bring Outlets to 70 percent pre-leased, said it was too early to announce the tenants, but that there about 45 spaces ranging from 2,000 to 5,000 square feet.

“There are national and international brands. They include fashion and footwear and kids and teen stores,” Levinson said.

Outlets at the Border, also originally conceived by LandGrant Development as an expansion of Las Americas Shopping Center more than 15 years ago, was reportedly close to starting when the recession hit. 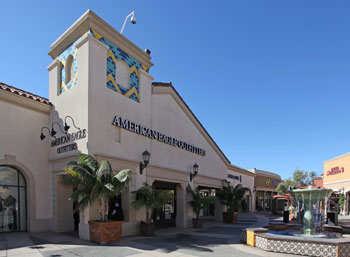 The existing 526,378-square-foot Las Americas center has few vacancies within its 125 spaces. Photo courtesy of CoStar

Brian Quinn, a Flocke & Avoyer senior vice president whose firm handles the leasing for Plaza at the Border, said he expects each of these properties to be strong.

“This market is doing well because, by in large, these centers have above-average stores,” Quinn said.

San Ysidro Village, Las Americas, and Plaza at the Border are within a South Bay submarket that continues to have low retail vacancies.

Different surveys have different numbers, but most have a plus-or minus 5 percent retail vacancy for the San Ysidro submarket.

Moser said he expects the vacancy to tighten further, provided there is enough vacant space to lease.

“There are fairly limited options down there,” Moser added.

San Ysidro Village, Las Americas, and Plaza at the Border continue to benefit from San Ysidro having the busiest border crossing in the world. As noted in a flyer by Flocke & Avoyer on Plaza at the Border, more than 100 million people make the trip annually. This figure is projected to rise to 130 million within the next decade.