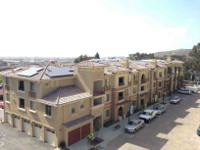 Solterra in Scripps Ranch is the first apartment complex in the county to run solely on solar energy. The 114-unit community also has a saltwater pool, clubhouse and tanning salon. Photo: courtesy of Grove Media

Four months later, the developer is saying the project -- which it notes is the first of its kind to power each unit through what’s known as virtual net metering -- appears to be a success.

The goal was to not only power all the homes with solar energy, but to do so while helping tenants to their financial benefit.

H.G. Fenton CEO Mike Neal said that as a 107-year-old San Diego-based company, H.G. Fenton wants to make sure it’s around for 100 more years. That means doing things that connect the company well and responsibly to its community, he said.

Embracing new technology -- and employing it in new developments such as Solterra -- as it becomes available is part of that mission.

“We are concerned as a company about where energy costs are going,” Neal said. “Our customer gets it that we have to figure out how to produce energy in different ways in order to have a sustainable community.”

His customers are “tuned into that,” he added, making the rollout at Solterra a positive one so far. The property was 100 percent leased within 10 weeks of becoming available, the company reported.

Ahead of its time

A member of CleanTech San Diego since its early days, H.G. Fenton figured years ago that being involved with other like-minded businesses would be a good way to understand what was going on with them, and to learn from them. When the idea of the Smart City San Diego Initiative of CleanTech San Diego came about a couple of years back, H.G. Fenton decided to employ its own efforts by adding to some of its existing developments and watching how that panned out.

By retrofitting all but one of its existing apartment communities with solar generation and power in the common areas -- spaces such as equipment areas and leasing centers -- H.G. Fenton took its first steps toward creating a community like Solterra.

“It’s a lot harder to do a retrofit to individual units, but it’s fairly reasonable to do that for all the common areas,” Neal said.

The reaction from residents in those developments, he said, was positive. They generally expressed excitement and thought it was great that the energy cost savings could be used to improve and expand community events, Neal said.

But they were also left wanting more, commenting that they’d really like to enjoy the same thing within their own units.

“As we went to go build this project, the site just lent itself to be that opportunity, where you can get enough of the slope area, and enough of the roof area, to put up the 1,380 solar panels it took,” Neal said. “So we decided to go for it.”

Home Energy Systems, a locally based solar energy system designer and installer, performed several of the retrofits. The company also designed and built the system at Solterra.

Ross Williams, the company’s vice president, said the project was much like any other installation, less some additional engineering required to fit the desired number of panels across the four-building development.

Limited by rooftop space facing the optimal direction, Home Energy Systems had to install -- in addition to what it could get on the roofs -- a ground-mounted solar array and another atop a carport.

“We had to come up with pretty unique ways to mount these,” Williams said.

What helped was the ability of San Diego Gas & Electric and the California Public Utilities Commission to come to an agreement on the allowance of virtual net metering, a tariff arrangement that enables a multimeter property owner to allocate a solar system's energy credits to other tenants.

That was before SDG&E and the PUC came to terms on virtual net metering, which for the last couple of years had been allowed only for certain applications, but never on a market-rate apartment development.

“Now, it had become available for market-rate housing,” Williams said, allowing for a more simple design. “Instead of having 122 individual, we actually had four -- one per building.”

In the process of determining how big of a system to build and how to equally spread the net metering credits across the tenants, H.G. Fenton analyzed the energy usage at its other 3,100 apartment units in San Diego. Based on that, it estimated the expected usage of the one- and two-bedroom units at Solterra, and allocated a certain amount of kilowatt-hours per month to each unit.

Other projects in which tenants have shared a community wide solar energy system have tended to be residences where electricity was included in the rent.

But that’s not what H.G. Fenton was aiming for. It was the integration of virtual net metering, Neal said, that was really innovative with Solterra.

“The ability for our customer to know in real-time how much energy they’re using -- and frankly, that piece is just coming online because it’s brand-new technology,” he said.

With virtual net metering, each tenant continues to receive his or her own bill from SDG&E. That bill tells how much energy was produced, the amount allocated to the tenant, and how much energy he or she used.

Each unit is equipped with an energy usage device to allow for real-time monitoring by each tenant. Every apartment is also provided with a collection of energy-efficient appliances and a Nest thermostat, which allows for remote thermostat adjustments from a smartphone.

“If their goal is to end up with a credit, then they can change their habits to achieve that,” Neal said.

A full year will have to pass before any quantifiable review of the system and how it’s worked within the virtual net metering program will be reportable, H.G. Fenton said.

But from feedback reported thus far by his community director at Solterra, Neal said, tenants are consistently asking how the system is working, and showing an excitement in wanting to gauge their bills against what SDG&E charges.

“When they open their bill, they’ll come in and share their information, and say, ‘Hey, look at how I did,’ or, 'Gosh, I didn’t do as well as I should’ve this month. What can I do differently,’” Neal said.

The goal, he added, is to do something that is real, tangible and beneficial to his customer. Along with other design components, such as additional insulation, low water-flow toilets and drought-tolerant landscaping, virtual net metering and an aim for a net-zero-energy housing development is just another component of the overarching goal.