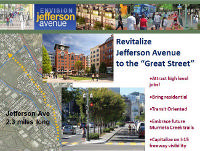 The plan to revitalize Jefferson Avenue.

Henry Ford said, “Obstacles are those frightful things you see when you take your eyes off the goal.” In the spirit of Mr. Ford, the city of Temecula’s gaze is steadily fixed on the ultimate goal: fulfilling the future community-driven vision for an area known as the Uptown Jefferson Specific Plan area.

It has been a little over a year since the city of Temecula conducted six visioning workshops, for which the process was dubbed “Envision Jefferson," bringing together a diverse mix of property owners, business owners, real estate brokers, and other interested community members to imagine the future possibilities for this 560-acre site. Recently called Uptown Jefferson for short, the name defines the area’s prospective identity.

Uptown Jefferson is located immediately north of Temecula’s Old Town, or downtown. It’s bordered by Cherry Street and the city of Murrieta to the north, Interstate 15 to the east, and Murrieta Creek and Diaz Road to the west.

Today, the Uptown Jefferson area is characterized by some of the city’s oldest commercial development. At one time, the area was vibrant and bustling with activity -- after all, Jefferson Avenue was once a part of U.S. Route 395, and the businesses along this route were vibrant and thriving.

Following the incorporation of the city in 1989, the area continued to develop under typical post-World War II development patterns: an eclectic mix of auto-oriented light industrial, office, strip-commercial and retail uses serving the local community. But a lot has changed since the “good ol’ days.”

The Stater Brothers grocery store that was located in the area has since, with other small retailers, and newer commercial development has since concentrated elsewhere. Nevertheless, the area still remains an important economic asset. During the visioning process the community affirmed that future efforts should be made to spark its revitalization and ultimate renaissance.

At each of the six visioning workshops, the community began to build the future vision for Uptown Jefferson one public meeting at a time. Over the course of the visioning process, workshop attendees pondered the question, “How do we get from where we are today to where we want to go in the future?” They enthusiastically took up his question and identified the study area’s future potential, and more specifically, the ways in which they see the area evolving over the next 30 years.

Meeting attendees forecast that the area will have an expanded mix of residential and mixed-use neighborhoods, more robust employment options, and expanded cultural arts and higher-educational opportunities.

Community members also expressed their desire to have a range of safe and efficient mobility options, not only by car but by foot, on a bicycle, or via transit. Green spaces, public plazas and recreational opportunities have also been identified as important features, and are anticipated to be interwoven into the urban landscape.

Additionally, cultivating a distinctive identity for the area was deemed important by workshop attendees. The community involvement that occurred at these visioning workshops has been critical in obtaining a clear picture of where the city is going. The vision that has resulted from this process will help spark revitalization and further the economic success and vitality of the area. The community-based vision that has emerged will set the stage for a specific plan, or future blueprint, for the area.

The Uptown Jefferson Specific Plan will be the implementation tool that will bring the community’s vision to fruition. With an eye toward the future, the city will develop a new, community-based long-term plan that will ensure and promote livability, mobility, sustainability and prosperity. The Uptown Jefferson Specific Plan will allow for exciting new opportunities to spur the area’s revitalization.

The community vision, which has emerged as a result of the public visioning process, will drive what will ultimately become Uptown Jefferson: a unique metropolitan experience, rivaled by no other place in the city or region. So, what can we expect in the future?

By peering through a visionary lens, Uptown Jefferson will be Temecula’s newest destination and will provide the city’s newest up-and-coming neighborhoods. Vibrant, sophisticated and unique, the area will be home to a diverse mix of residents. People of all ages, experiences and interests will be drawn to the area by its offering of a more urban lifestyle.

The area is envisioned to be up-scale and culturally robust, offering a mix of homes, shops, offices and restaurants, artfully linked through pedestrian-friendly green spaces, sidewalks, and trails. Uptown Jefferson will soon emerge, driven by a strategic, community-based vision, well-designed and built from the collective efforts of public participation, private development, and public investments. We can’t wait to see what the future will bring.