It only took 14 years, but the former Hope Engineering finally has a new logo and new name: Hope-Amundson Structural Engineers.

"We would have liked to have rebranded earlier but we wanted to first get through the recession and then change our name," said Chuck Hope, principal of the downtown San Diego firm. "It all came together nicely with our 20th anniversary this year. Even though Jim (Amundson) came on board in 1999, many people didn't realize he's been a partner since then."

While the name change wasn't a priority, getting through the recession was a priority for the company, which Hope founded in 1993.

"We took our lumps primarily in the latter part of 2008 and through much of 2010," Amundson said. "Things started to rebound for us in 2011. We remained very committed to servicing our clients well during the downturn and we sacrificed a bit financially to keep our core team in place. But once the economy started turning around, we were well-positioned and projects came back to us pretty quickly. 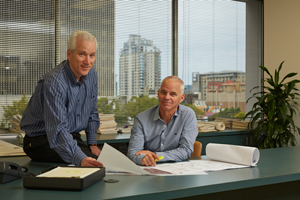 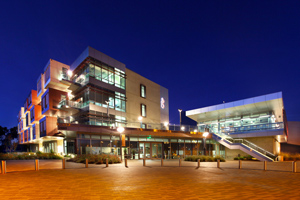 "We had a really stellar 2012 and it's carried over into this year. We've gotten back to pre-recession levels in terms of number of employees and revenue. The past two years have seen our fastest growth since Chuck started the company. Currently, we are seeing lots of opportunities and we're as busy as we've ever been."

The team credits its collaborative approach to working with architects, contractors and owners as the key to its reputation. Its $400 million construction portfolio in 2013 includes many prominent projects in the western United States, with an emphasis on San Diego County. Local structures include the Sanford Consortium for Regenerative Medicine, Mesa College Mathematics and Natural Sciences Building, Genentech manufacturing and clinical operations complex, Thomas Jefferson School of Law and San Diego Zoo Elephant Odyssey. (Vice President Michael West, who joined the firm in 2010, specializes in zoological construction.)

The partners met in 1986 while working at Hope Design Group, the San Diego architectural engineering firm founded in 1929 by Chuck's renowned grandfather, Frank Hope Sr. Amundson later moved on but the two stayed in touch until Chuck persuaded Jim to join him as partner a few years later.

"A real benefit for our clients is that Jim and I both worked side by side with architects, learning to understand how they approach design and put projects together," Hope said. "Our clients appreciate our collaborative attitude to working with the architectural design intent to find a solution that will work for them. So thinking outside the box, being creative with our structural solutions, incorporating innovative framing and design solutions allow our client to achieve their design goals. The high quality of our product, which is our design documents, is such that general contractors appreciate the thoroughness and completeness, and consequently promote us to be the structural engineer of record for that reason."

"It's easy to say we emphasize client satisfaction, but we're really serious about meeting our clients' needs." Amundson said. "We have a very strong culture internally, with a dedicated staff that supports one another and is very committed to the successful completion of their projects. We provide extensive training, solid growth opportunities and have a lot of fun, which results in very low turnover. Out of our staff of 25, there are nine who have been here 10 years or more. We're proud to say we haven't had an engineer leave us to go work for a competitor in our 20 years."

The principals are quick to praise their "very strong, seasoned leadership, with vice presidents who have extensive professional experience." In addition to West, they include production manager Brad Lowe; high-rise and large-project veteran Frank Martinovic; and concrete specialist Jim Conley. They also give tribute to the late vice president Dave McMaster, who died last year of brain cancer. "He had a major role in growing the company over his 12 years," Hope said. "His legacy won't be forgotten."

Working with Hope-Amundson to rebrand their already prestigious firm, was very rewarding...to work with clients who value the role brand plays in increasing awareness and ultimately gain referrals and work, is at the heart of Studio 2055's mission. We are grateful to be a part of this dynamic company.