It was years of hard work and persistence that kept Turner Construction Company connected to the downtown Central Library project, which opened in September. After the project initially lost funding in 2004, the general contractor never gave up on having a new main library downtown. Knowing it would be a landmark project, Turner stayed involved until there was a breakthrough in funding that allowed them to build the project.

After 111 years in business, Turner's ability to address changing conditions and demands, find and serve diverse markets, and expand its services has resulted in the company growing and landing landmark projects that enhance the local skyline and community at large. 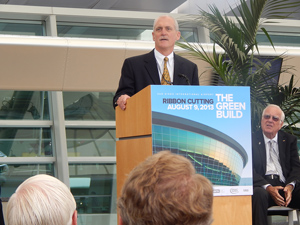 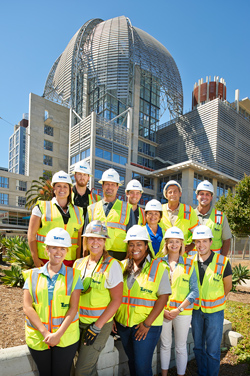 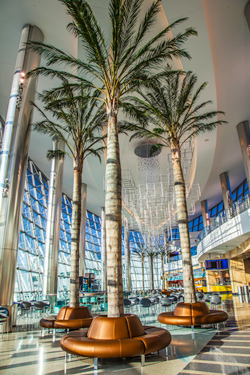 As the general contractor for the The Green Build — Terminal 2 Expansion which opened in August, Turner and their JV partners PCL Construction Inc. and Flatiron, went through an intensive pre-qualification process in 2008 that included a four hour interview with the San Diego County Regional Airport Authority. They were selected and began work on design development in April 2009.

Project director Dan McGuckin recalls this project as one of the highlights of his career as it was the first time the Airport Authority used the design-build approach.

"We developed an outstanding collaborative team with a common mission to make the new terminal a landmark project for the community — it was successful in all aspects and a project built by the community (more than 86 percent of contractors were local trades/companies)," McGuckin said. "More than 30 percent of volume performed was by small businesses, and we finished ahead of schedule and way under budget."

The number of people needed to make these huge projects successful is staggering. For the airport project alone, Turner employed over 4,000 workers on site, and then double that number for vendors and suppliers, as well as those working offsite. Working as a team with such a huge number of employees is a tough endeavor but one that Turner takes seriously.

"For the airport project, one of our biggest challenges was ensuring the entire team developed camaraderie, collaboration and commitment to completion of the job," McGuckin said. "We had to learn to trust each other and in the team's confidence and good intentions."

When asked the secret to Turner's success and longevity in this marketplace, McGuckin answered right away: "People first and foremost — I have been in San Diego since 1989 and always really enjoyed the people I have worked with here. As the largest green contractor in the country, we employ over 40 LEED professionals and are always looking for new and innovative ways to make projects better, higher quality and more efficient. We pride ourselves on repeat business and strive to have clients be our respected friends for the long term."

Being connected to the community is another reason for Turner's success. The company sponsors a variety of programs at the local level including the ACE Mentor Program, Rebuilding Together, Toys for Tots, Habitat for Humanity, and an annual charity golf tournament supporting local organizations. Turner also hosts the Turner School of Construction Management three times a year in a series of night classes taught by Turner staff members, where local small businesses are taught how to be more efficient and how to work for a larger contractor like Turner. The classes are so popular that there's always a waiting list.

By Jada Thomas, The Daily Transcript