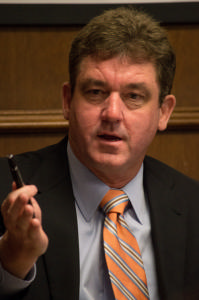 The construction industry is improving, as some economic indicators would suggest, but not at the pace local officials would like, according to a panel at an executive roundtable held at The Daily Transcript on Oct. 31.

"The industry is getting better, but not as fast as we would want it," said Jim Roherty, president of Pacific Building Group.

Wayne Hickey, general manager of the San Diego office of Suffolk-Roel, said his company's construction backlog will be up 5 percent in 2014, compared with 2013, with most of the work coming from the private sector.

"It’s not great. It’s steady," Hickey said, adding that backlog for 2015 seems to be looking better in terms of opportunity from lenders, developers and architects.

"People are talking about work possibly in the future," Hickey said.

Dmitriy Nathanson, president of Elen Consulting, agreed with Hickey. He said the best way to describe San Diego is "let's talk about work," because developers and companies are afraid to commit to build -- even though design plans are already complete in most cases.

"Engineers are normally ahead of construction (trends) for new projects, at least a year," Nathanson said. "Last year, our proposals more than doubled, but it's becoming difficult (for those proposals) to become actual jobs, so people seem to be waiting for (someone) like Qualcomm.

San Diego’s construction employment grew by 700 jobs from July to August this year; however, jobs are down by 3 percent, or 1,800 workers, from August 2012, according to California’s Employment Development Department.

The Architecture Billings Index showed demand for design services grew at its fastest pace ever in the West region, posting a score of 60.6 in August. This report indicates a nine- to-12 month lag time between charging for design services and construction spending.

At the national level, nonresidential construction spending grew 0.2 percent in August and is up 1.3 percent on an annual basis, according to the U.S. Census Bureau’s report Oct. 22.

All these indicators suggest construction in San Diego is picking up, but not as fast as other parts of California and the West Coast.

"We certainly think of the cities on the West Coast, Seattle, Portland, San Francisco, (Los Angeles) and San Diego; (that) San Diego is probably the slowest of those," Roherty said.

So what, exactly, is the problem in San Diego?

Roherty said what hurts San Diego is that besides Qualcomm (Nasdaq: QCOMM), there are no Fortune 500, large companies or new industries coming to San Diego that are creating jobs, taking up office space and creating a need for new construction.

Sharon Singleton, principal at KTU & A, said the lack of good leadership in San Diego is the problem of insufficient growth.

"Do you think if we had the leadership and someone out there promoting (and) bringing those industries and supporting them, that would help with employment?" Singleton asked the panel.

Singleton added: "But we really haven’t seen that in recent years."

All agreed that competition is still fierce among general contractors, so profit margins are still thin and staff sizes are still small.

"We do see San Diego coming back gradually and slowly, but there still is a great deal of competition out there, so rates are slow and we got to be very creative," said Dan McGuckin, operations manager for Turner Construction. "We got to be very efficient on how we do our work. We focus a lot on how to be leaner and more effective in how we do everything."

Richard Crowley Jr., senior vice president with Kitchell Contractors Inc., said competition and a lack of a market to take the place of reduced military spending is part of the problem, as well.

"We are suffering from a military hangover," Crowley said. "It seemed to subsidize the economy for quite some time, but (we) can’t seem to get out of it."

Roherty said out-of-town contractors who came to San Diego for the big military construction spending roughly five years ago have stayed in town and added to the competition.

Singleton pointed out that even though military spending has dried up, federal spending is still going on and will bring specialty construction jobs.

"We do a lot of federal planning and there are still some of the specialty programs that are very strong." Singleton said. "So I think the specialty contractors that have that technology background will do well with the stuff that is coming up in the next three to five years."

Pete Spencer, owner of Audio Associates, asked whether there would be enough skilled labor, especially in the technology field, to keep up with this new demand in contractors.

"I see a shortage of skilled labor, especially in the technology industry, and that’s what’s exploding right now," Spencer said. "Because that comes at the very end of the project after the infrastructure is all in. And if something doesn’t fit or doesn’t work, then there is a major crisis."

On the design side, Matt Barnard, associate principal at Degenkolb Engineers, said work is not as strong as it used to be -- especially on the health care side -- because of changing business models, uncertainty in the Affordable Care Act and all of the legislatively mandated, seismic retrofitting already in the construction phase.

"You are not seeing the half-a-billion dollar, brand-new hospital, ground-up type of construction jobs hitting the streets in the next few years," said Barnard, whose firm mainly designs health care projects.

Barnard added that the industry is not going to see any large, catalyst-type projects that would revitalize an entire neighborhood -- such as a new stadium or housing development -- anytime soon.

Smaller projects will be vastly popular over the next several years, which are causing firms to downsize and do more with less while keeping customer service up, which Barnard said is a huge challenge.