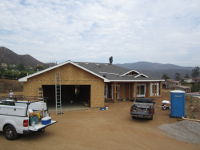 Nonprofit organization Homes for Our Troops teamed up with the Escondido branch of CertraPro Painters and Youngren Construction to build a custom home in El Cajon for an Army Sergeant who was injured while serving in the Middle East.

In less than a month, two men who served numerous military tours in Iraq and Afghanistan before returning home with injuries will move into their new custom-built homes in El Cajon.

Recent efforts by a number of local construction contractors and several hundred volunteers just looking to help have ensured that the program bringing those new homes to Army Sgt. Odin Ayala and Marine Cpl. Travis Greene -- Homes for Our Troops -- will continue doing work for San Diego’s veterans.

The local franchise’s involvement in the charity dates back to January, when the company held its national sales conference. One of the Escondido franchise’s employees, Sandy Brians, found out that Homes for Our Troops -- which she had never heard of at the time -- was hosting a 5-kilometer run there as fundraiser.

Dan Hutchins, owner of the Escondido CertaPro franchise, said that sparked a search for ways his local company could give back to its community. Brians, he said, had for a while already been talking to him about wanting to do something as a charity.

“We’ve been in business for 15 years, so I’ve done a lot of painting, and have a lot of customers but hadn’t really done any true charity work,” Hutchins said.

Brians took the initiative, he said, to find a way.

About a month after the conference, she received notice from people she had talked to at Homes for Our troops while in Florida. They were scheduling two projects in San Diego, and hoped to enlist her help since she had shown interest.

“I didn’t know what I was going to do, but I thought, well I’ll do something,” Brians said.

The homes for Ayala and Greene had already been funded, but her job now was to organize something to fund the program further.

While visiting with management at Humphrey’s by the Bay -- trying to organize a separate charity event for her local CertaPro franchise -- she came to find out that the Shelter Island Hotel Group’s annual race was without a sponsor this year. It was perfect timing, as Brians was still searching for a way to raise funds for Homes for Our troops, and had considered organizing a race like she had seen in Florida.

The race, held Nov. 3, raised a net total of nearly $15,000 for future Homes for Our Troops projects, Brians estimated.

In addition to raising the funds, the Escondido CertaPro donated its labor to the charity’s cause, serving in recent weeks as the interior painting subcontractor on the Ayala and Greene homes.

The key ceremonies for the homes, when the two veterans are scheduled to receive the keys to their completed homes, are planned for Dec. 2.

The homes -- both 2,900-square-foot custom designs -- were built ADA-compliant and as approved by the U.S. Department of Veterans Affairs, according to Scott Layton, an estimator with Fallbrook-based Youngren Construction, which served as the general contractor on the two projects.

Scott Youngren, owner of Youngren construction, said he first became involved with Homes for Our Troops roughly four years ago, when the organization called him “out of the blue,” looking for a builder on a planned project in Fallbrook.

“The guy that I was working with didn’t really explain to me what they were all about, so we did the house -- ended up building it -- and then we kind of learned what they’re all about and who they build for,” Youngren said. “Now we’ve done four of them.”

Once he knew more about the organization and its cause, knowing it was a nonprofit, he “latched on,” Youngren said.

Built with four bedrooms and two bathrooms, the houses were equipped with self-operating doors, specially equipped showers and specialized cabinetry.

“So they can move around in their wheelchairs freely; They can raise their families without anything in their way of being able to bathe their kids or feed their kids, things like that,” Youngren said.