There's nothing quite like working the night shift at a convenience store to prove that you're overqualified.

That's what developer Phillip Chodur learned in the summer of 1976. He came to San Diego for a summer job in construction to make enough money to finish his master's degree in political science at the University of Texas at Austin. The job he'd been promised here went to someone else, and the only work he could find at the time was at a 7-Eleven.

"Everyone else said I was overqualified, for some reason," said Chodur, president of G8 Development Inc., the firm he went on to found in Pacific Beach. "The night shift at 7-Eleven is very boring, so I started studying to get my real estate license. And that's what started my career."

Chodur went on to become a successful real estate broker, developer and general contractor licensed in California and Hawaii. He also is a Certified Commercial Investment Member, CCIM, a recognized expert in commercial and investment real estate as designated by the National Association of Realtors.

The Mount Helix resident founded G8 Development in 2006, and has grown it to 10 employees who focus on project development and construction management. The firm has completed developments around San Diego County and in other states.

One of G8's most challenging assignments has been a TOD (transit-oriented development) project across from the Sprinter station in Vista at 240 N. Santa Fe Ave. and Vista Village Drive. The 25,000 square feet of commercial space and 81 residential condominiums are awaiting approval by the city's Planning Commission.

"It took so long because they probably made six major changes to the project," Chodur said. "But that's OK. We always solve problems some way. We never give up."

The development paid off in the form of an endorsement last month from the Move Alliance, a nonprofit that supports effective transportation options and sustainable growth in the San Diego region. The endorsement, given by Move San Diego's coalition of local experts, environmentalists and transportation advocates, is based on the project's proximity to transit, effective parking solutions, mix of residential and retail uses, and walkable opportunities.

G8 also didn't' give up on a 49-home subdivision it recently completed in National City, Chodur said:

"We started on the grading and infrastructure for the 49 lots in late 2007. The first phase of 20 homes was started in spring of 2008. Before that phase was complete, the bank cut the loan by $1.5 million. Then the feds came in and took over the bank with a new lender who wouldn't lend. Since it was a redevelopment project with the city of National City, which had restricted sales requirements, we were required to press ahead with construction. After the sale of all 20 homes, we still owed $2.2 million. Though there were many sleepless nights, the project was finally completed by late 2012." 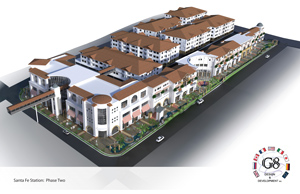 The TOD (transit-oriented development) project across from the Sprinter station at 240 N. Santa Fe Ave. in Vista.

Through the trying times, G8 was still analyzing development projects. A number of new hotels are planned for San Diego and Riverside counties, plus a mixed-use and Hilton Garden Inn in Mason City, Iowa. A planned residential development is on the drawing boards for El Cajon, as are residential condominiums in Riverside. "We do things where opportunities present themselves and hire according to how much work we have," Chodur said.

Based on his firm's track record, he offers some advice for current and future developers: "You need to have a lot of patience in this business. Back around 2006, when people were paying twice what they should have been paying for land, we refused to do that. We get projects thrown at us every day. They have to work in this economy. You can't ever rely on market forces escalating prices. Market forces can drive prices down as quickly as they are driven up. You always have to be conservative in making decisions.

"I tell people who want to get into development, if it was easy, everybody would be doing it."