The structure is expected to alleviate parking problems for Administration Center workers and visitors as building starts on a new waterfront park that will occupy a former parking lot. The parking structure, at the southwest corner of Cedar Street and Kettner Boulevard, will provide 645 spaces on seven above-ground and three below-ground levels.

The county plans to make the structure, just one block west of small-shop-friendly India Street, available during non-working hours and weekends as a commercial parking structure for the public.

“Today, with so many popular restaurants and shops, and the number is growing … the one thing we found — we needed more parking,” San Diego County Supervisor Ron Roberts said at the ceremonial groundbreaking. “We need it to serve the public.” 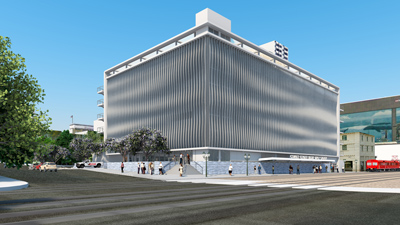 Excavation at the site, which is now a grade-level parking lot next to the County Center/Little Italy trolley station, is expected to start in January.

The parking structure is being financed through general obligation bonds at an estimated cost of $35.5 million. Nearly $24 million will go toward construction, and about $12 million is budgeted to clean up contamination from underground storage tanks.

The work will include building a canopy on the west side of the structure, extending over the trolley platform for shade. Landscaping will be added along the north and east sides facing Cedar Street and Kettner Boulevard.

County officials said they don’t know yet which parking management company will handle parking operations. April Heinze, director of the county’s department of general services, said the contract will be awarded through a competitive bid process.

McCarthy Building Cos. Inc. is the project’s general contractor.

Supervisor Dianne Jacob said that once complete, the structure will include energy-efficient lighting, rainwater collection for irrigation, and electric-vehicle charging stations.

The structure is scheduled to open in June 2015.