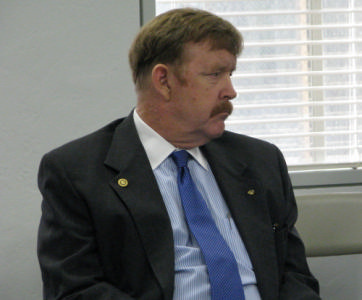 During a roundtable at The Daily Transcript offices Dec. 5 sponsored by Mintz, Levin, Cohn, Ferris, Glovsky and Popeo P.C., and Seattle Funding Group, commercial brokers, investors, attorneys and facilitators of financing for new construction, as well as acquisitions, expressed their views and concerns about 2014.

Scott Biel, a co-chair of the real estate practice for Mintz Levin, wondered aloud "where would I go if I wanted to put a headquarters in San Diego?"

"We need one large employer to come down to the CBD [central business district]. Preferably we could get a high-tech company, like a Sony," Brown said.

Rents for existing office space are going up, as well.

"We're looking at 20 to 30 percent year-over-year increases. Our own company is looking for a floor-and-a-half in the area, and it's expensive," Van Betten said.

Van Betten recalled that the last time there were single-digit office vacancies a decade ago, "we had a construction boom."

The office vacancy was pegged at 8.3 percent in the UTC area at the end of September according to The CoStar Group (Nasdaq: CSGP), and in Sorrento Mesa, the figure was 8 percent.

On the topic of medical office, Andrew Meyers, a financial analyst with McKinney Advisory Group, said new construction projects are few and far between, though more are planned.

Brent Bohlken, a Newmark Grubb Knight Frank senior managing director, said while medical office construction is currently limited in San Diego County, March Air Force Base in Southwest Riverside County is in the midst of developing a huge medical campus. The Press Enterprise reports that the project will include 6 million square feet of buildings, including a 550-bed hospital, medical office, ambulatory care and retail space.

As office spaces, including medical offices, have continued to tighten, so too have industrial markets.

Bohlken said Riverside County's industrial market is expected to hold up despite nearly 10 million square feet underway, and Los Angeles County with its nearly 1 billion-square-foot industrial submarket is only about 2 percent vacant.

"And less than 1 percent of the developable dirt is left in the LA market," Bohlken said, adding that with an 8.5 percent industrial vacancy here, San Diego's market has limited industrial space in most subareas, as well.

Molnar said build-to-suits are an exception. For example, Applied Membranes, which manufactures reverse osmosis systems, is planning a 157,000-square-foot facility in Vista.

On the topic of the construction of market rate San Diego apartments, Chris Robinson, a principal of Acre Investment Real Estate Services, said "they don't pencil unless they are high value [luxury]."

"Owners are rehabbing old complexes and are cranking up the rents," Robinson said. "People are willing to pay more for a nicer product."

"The other issue is the required down payments are much larger than they used to be," Zikakis said.

As for who is buying residential property, Charles Salas, Seattle Funding Group senior underwriter, said there is a significant amount of Chinese investment in residential development, but added that the investors are not purchasing them to live in them -- leaving them empty.

Chad O'Connor, Marcus & Millichap vice president of capital markets, and Salas said Asian investors are not only purchasing residential and commercial properties, they are providing financing for them, as well.

Zikakis said retail, which took a huge hit about three years ago with the departure of stores such as Mervyn's, Circuit City and Linens 'n Things, has rebounded nicely with the backfilling of these formerly empty boxes.

"Mom-and-pop tenants have been slower to rebound" Zikakis said, adding that it is still difficult to believe how quickly retail has recovered.

"But who would have thought home prices would go up by 26 percent in one year," Zikakis said.

Marten Barry, NAI San Diego director and president, said one type of retail that still suffers is the restaurant business, noting the announced closures of The Palm and Donovan's Prime Seafood in the Gaslamp Quarter.

Athena Harman, Harman Realtors president, said there are leases up for renewal for $4 to $5 per-square-foot in the Gaslamp Quarter. While that may sound like a lot, she said, the rents at the Third Street Promenade in Santa Monica are in the neighborhood of $18.

As for finding financing for new developments, much depends on the asset class. The roundtable members generally agreed that apartments are the most favored.

Iacono said that while there is a lack of available land, underwriting for new construction remains extremely tight.

Dawn Saunders, another member of Mintz Levin's real estate practice group, said developers may be unwilling to commit as long as they are uncertain about the availability of debt.

"People are unwilling to make long-term decisions on their home when they are uncertain, and this carries over to the office developer, as well," Saunders said.

A number of the participants said they either have recently hired or are planning to hire more workers. Saunders said Mintz Levin is hiring more attorneys, Taylor said CBRE is planning to grow as it reconfigures its offices, and Meyers said McKinney has seen its workforce grow by 15 percent year-over-year, and plans to add more to it.