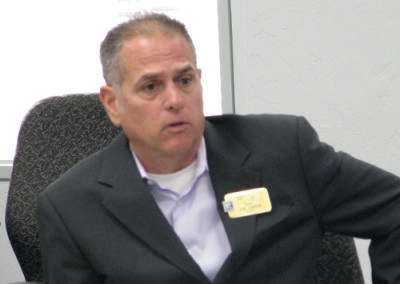 Local real estate professionals took a look back on 2013 while predicting what’s to come in 2014 at a recent roundtable discussion hosted by The Daily Transcript.

The biggest change for buyers and sellers in 2014 will be the absence of investors come spring, they said.

“2013 started with low prices and low interest rates and short sales and REOs -- and investors were buying them up like crazy," said Joe Carta, owner and broker at Century 21 Horizon. "Then a couple things have happened -- in the middle of the year, toward the second and third quarter, interest rates started to rise, prices started to rise, there were fewer and fewer short sales, fewer and fewer REOs, and now investors are writing offers to property owners not banks and short sale lenders."

San Diego is difficult to generalize because of the different micro-markets, said Marty Conrad, regional vice president at Coldwell Banker. He said he’s seen a slowdown in the number of units the past few months, and the average time on the market is about the same as it was six months ago.

The spring of 2013 was “absolutely amazing,” said Cameron Herndon, Realtor at Keller Williams Realty, but it was just a short-term change.

“What I’m worried about is come this spring, you have a lot of buyers and sellers -- especially sellers -- thinking, ‘Oh, we’re going to have an amazing spring like last spring.’ But if investors aren’t coming back … then I don’t see us having that spring again,” Herndon said.

He said buyers are waiting for the spring in hopes of seeing more inventory, and sellers are also waiting in hopes that the spring will bring another increase in prices.

Loren Sanders, Realtor at Sea Coast Exclusive Properties, said it’s up to those in the industry to inform buyers and sellers of the odds for another spring like last year.

Conrad said that local professionals predicted that the San Diego market would come back strong and without notice at a roundtable at the end of 2012 -- and it did. But it wasn’t because of the economy. People realized it was a good time to buy and followed each other, “until it didn’t make sense anymore and then they put the brakes on.” And about three to four months ago, there was a price reduction from sellers.

Marie Jebavy, chairwoman for the North San Diego County Association of Realtors, said a normal market in Vista, Oceanside and Carlsbad sees about 33 to 40 listings per day, and it has 18 to 20 listings and is selling about 10 to 12 of those. Inventory is increasing and sellers are reducing their prices, she added.

Buyers stepped back when interest rates increased in the summer, and Herndon said many investors left right around that time, as well.

A big change has been sellers waiting the extra two to three weeks to get 20 to 30 percent more than what they may have gotten from an investor, Carta said.

“Those are not homebuyers. Those are renters. And so the concern at UCLA is and was that maybe there’s a false foundation here in the minds of a lot of people who think this economy is on an uphill trajectory, given that 20.9 percent [increase in home prices],” McAllister said.

Herndon added that investors hopefully and theoretically know something that others don’t know.

“They’re buying up all this property and they’re not cash-flow properties, these are equity properties that they want to keep for three to five years … and then unload eventually,” Herndon said. “Which means they’re going to hopefully increase their equity -- which means they believe that the market, that we’re going to come out of this recession finally.”

The county reached an all-time high for collection rates at 98.6 percent, McAllister said. There was about a 3 percent overall increase in valuation for tax purposes and is projected to bring in $4.8 billion from collections -- up from $4.55 billion last year. The number of taxable parcels in the county has reached a new record over the past nine years, up about 1,500 from last year to 981,829.

Alex Rojas, owner and broker at ShorePoint Real Estate, said most of his clients are investors. He’s seeing infill properties by the beach, with developers tearing down old properties and seeing how many homes can be built there.

“We have new construction set up from 2012, 2013, 2014, 2015. Looking forward, we have a real healthy perspective as to what our demand is going to be moving forward. We also still have a small pool of investors that are buying notes and trying to take those properties over and sell them out as a flip property,” Rojas said.

McAllister agreed with Rojas. "There’s not a lot going on in some areas, but there is some in other areas.” There used to be land buyers who purchased large chunks of land, but there aren’t big chunks to buy anymore, he said, and those buyers are now being “very cautious and careful” as to what they do buy.

“Some of the areas in Eastlake and South Bay and San Marcos … they’re taking them 10 to 20 lots at a time instead of 200 lots at a time and they’re doing smaller, incremental projects,” McAllister said.

Alisha Sirois, senior loan officer at Guild Mortgage, said the change she’s seeing is an increase in step-up buyers as prices appreciate. She also said the market has switched from a seller’s market to a more traditional market, with sellers waiting a little bit to get a good, qualified offer.

Vanessa Ruelas, owner and Realtor at Twin Cities Realty, said she thinks it’s turning into a buyer’s market in Riverside County. Buyers are starting to have choices on houses, which are sitting 30 to 45 days before getting a quality offer.

“Prices are softening, the buyers are few but the buyers that are shopping are qualified,” Ruelas said.

Gary Nordstrom, owner of The Nordstrom Team, said insecurity has kept buyers from the marketplace. That insecurity is resulted from the government shutdown, he said, and health care reform contributes to it because people don’t know what their personal insurance price is going to be, he said.

“I don’t know of anyone who can come to the table and say, ‘Yeah, write a loan for me and I want to buy this house,’ when they don’t know what they’re going to be paying in health care,” Nordstrom said. “To me, that is an insecurity that is not going to go away for a long time, simply because I think we’re just seeing the tip of the iceberg relative to health care costs.”

Jebavy and Rojas agreed that the Dodd Frank regulations are worrisome for 2014. Rojas said it will restrict lending with the restriction on the debt-to-income ratio.