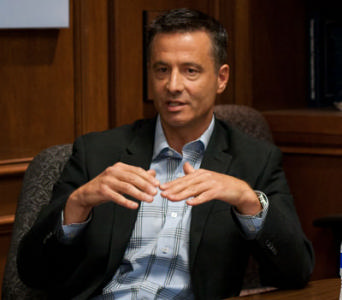 Invited to a Daily Transcript roundtable discussion, the executives were joined by John Turpit, director of corporate and developer services for RJC Architects. Most of them concluded that signs of a push toward value in Class B space — as opposed to the run on Class A space seen just a few years ago — mean positive activity.

For the first time in years, Derek Hulse, associate vice president of Colliers International, is receiving multiple offers on suburban Class B spaces.

“I can’t tell you the last time I had to call up our friendly tenant reps and say, ‘I’ve got another offer, how are we going to play this?’” Hulse said. “It feels pretty good.”

A preliminary audit Hulse conducted recently revealed that in the second quarter, there might be more than 500,000 square feet of positive net absorption, indicating a still-improving occupancy rate.

The new San Diego FBI facilities are included in those figures, he said. But not counting that gain, there’s still about 290,000 square feet of positive net absorption, compared to the 80,000 square feet he recalled for second quarter 2012.

He predicted a countywide commercial property vacancy of less than 14 percent may be on the horizon.

In early June, the county’s industrial vacancy rate already showed signs of making a dent in overall commercial vacancy, when a Cassidy Turley report indicated a 9.3 percent vacancy rate in that sector, its lowest level since mid-2011.

Opportunities are showing up for tenants as well.

Stephen Holland, senior vice president of CBRE, said the swing in favor of tenants has been especially strong in the county’s suburban markets, such as University Towne Centre and Del Mar Heights. But things could be ripening for a shift, he suggested.

There are about 67 million square feet of office space in San Diego, he said. In 2009, the area had a vacancy rate of about 20 percent. It’s now at about 14 percent. Rates in UTC and Del Mar Heights are now below the 10 percent mark.

That may create challenges for tenants seeking large spaces of more than 30,000 square feet in those core markets, Holland said.

“During the downturn, we saw lease rates plummet by 30 to 40 percent,” Holland said. “Over the last 18 months, they’re trending to the high-water mark that was set in 2008. Moving forward, tenants are going to suffer from sticker shock.”

About 1 million square feet of Class B space, often associated with low-rise corporate headquarters, is poised to become available in the next couple of years in UTC, aided by the LPL Financial move-out of its 400,000 square feet.

“There is still plenty of pressure on cap rates to make tremendous values,” for current owners, Quinn said.

“It’s easy because you can point to the Irvine Co.,” Jarvis said. “They’ve been like clockwork every quarter, 10 or 20 cents, raising their asking rental rate.”

While UTC is clearly a strong market, he says that trying to identify the county’s strongest submarkets doesn’t provide clear answers.

Even within UTC, he said, the property type matters when figuring that out. Much of the Class B space there, he said, is comparable to the high-rise Class A multi-tenant space.

“If you separate those two markets, you’ll see increasing vacancy, and what we anticipate is declining rents for the larger block, flex, off-of-La Jolla Village-drive-type of buildings,” he said. “If you just look at the multi-tenant Class A, you’ve got a radical decline in vacancy rates, and that’s where Irvine’s raising rents about every quarter.”

Holland doesn’t predict the same declines, as the model used by Irvine, he said, has been adopted by other landlords.

“I don’t see that going away,” Holland said.

Dan Broderick, president of Cassidy Turley San Diego, said that after seeing two consecutive quarters of positive net absorption in Class B space, the signs seem to be pointing to a move toward value in the core markets. While select areas like Carlsbad are still showing movement toward Class A space, the bigger trend is value.

“Downtown is a great example of that,” Broderick said. “You have a number of large blocks of vacancy and it just decimates the vacancy rate downtown, and provides a tremendous opportunity for a tenant looking down there.

Several large tenants looking for more than 50,000 square feet are looking at those downtown spaces right now, he said, meaning that the situation could change quickly.

Vacancy rates are higher downtown, though, where Holland says the next wave of opportunity may lie after a prolonged period of watching tenants leave.