If the Palo Alto-based Essex Properties Trust follows through on its proposed $4.5 billion acquisition of San Francisco-based BRE Properties, Inc., the ownership of more than 3,700 San Diego-area apartments in 11 complexes would change hands.

Essex (NYSE: ESS) entities already own a dozen apartment properties in San Diego totaling 2,714 units, plus a 0.57-acre parcel at Front and Ash Streets, where the BRE Properties real estate investment trust is planning 140 units. No timetable for that project has been announced.

The CoStar Group has identified 11 San Diego-area apartment properties owned by BRE (NYSE: BRE) companies totaling 3,708 units — many of which are completely leased or within a few units of being fully occupied. BRE is not to be confused with BRE Commercial.

The largest property on the list — the 616-unit Esplanade complex on Camino Ruiz in Mira Mesa — had zero vacancies as of the CoStar survey within the past 60 days.

The Esplanade units have one- and two-bedroom floor plans ranging from 588 to 907 square feet. At the time of its survey within the past month, CoStar reported the rents ranged from $1,210 to $1,515.

The 472-unit Montañosa apartment complex in the Tierrasanta submarket is another case. CoStar reported that it couldn't find any vacancies there despite the property's large size. The rents at the complex ranged from $1,485 to $1,835. The one- and two-bedroom units range from 710 to 1,037 square feet. 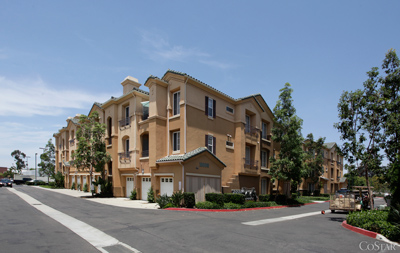 Other complexes owned by BRE that had no vacancies at the time of the CoStar surveys included the 208-unit Mission Trails complex in the San Carlos area, the 262-unit Allure in Scripps Hills Ranch, the 300-unit Lakeview Village Apartments in Spring Valley, and the 356-unit Carmel Landing complex in the Carmel Mountain Ranch area.

The most expensive rentals in the BRE portfolio have had fairly low vacancy levels. The 348-unit Carmel Creek development in Carmel Valley has units renting from $1,716 to $2,587 per month. The complex had 24 units available for a 6.9 percent vacancy rate.

A 5 percent vacancy rate is considered the industry standard for a balanced complex and market.

The 320-unit Cambridge Park development in the Serra Mesa area had rents ranging from $1,518 to $2,300 and a 3.1 percent vacancy — or roughly the average vacancy for the city of San Diego, according to the San Diego County Apartment Association.

The 364-unit Pinnacle at Otay Ranch in Chula Vista had a 4.7 percent vacancy rate despite high rents, according to CoStar. Those rents ranged from $1,501 to $2,336 per month.

Other complexes in the BRE portfolio include the 216-unit Bernardo Crest complex in Rancho Bernardo (3.7 percent vacant), and the 246-unit Carmel Summit Apartments in Carmel Mountain Ranch that had just a single vacant unit available according to CoStar.

Despite the fact that BRE has many properties that are full, the REIT had a rough time last year. Jonathan Litt, CEO with the Land & Buildings analysis and investment firm, said in December 2012 that it was past time to sell BRE Properties to the highest bidder to preserve shareholder equity.

"If the trustees of Lehman Brothers (NYSE: LEH) saw it as more profitable to sell Archstone (the apartment investment and development firm) than to take it public, then BRE's board should follow Lehman's lead, as BRE is worth more in a private sale than at the steep discount it trades at today," Litt wrote a year ago.

As for Essex's assets in San Diego, the 2,714-unit apartment portfolio includes the 379-unit Domain by Alta development at the San Diego Spectrum in Kearny Mesa that it paid $121 million for in an all-cash deal last month.

As was the case with BRE, many Essex apartment complexes in San Diego have little to no vacancy at all.