The price involved a cash payment of $2.9 million and assumption of the balance of a February 2013 lien from JPMorgan Chase Bank (NYSE: JPM) originally for $3.95 million. According to the broker, the loan was assumable at 3.6 percent.

The seller of the property (423-124-14) was Thomas M. Funke. Anni Grimes, of Sperry Van Ness Finest City Commercial represented the buyer and the seller. The three-story approximately 16,177-square-foot apartment, built in 1960 on a half-acre lot 1.5 blocks from the ocean, consists of 30 one-bedroom units, a single two-bedroom/one-bath unit and three studios.

At three stories, units on the third floor offer views. The amenities include on-site parking for all tenants, a swimming pool and on-site laundry facilities. The property was acquired by Funke in mid-2006 for $4.75 million. 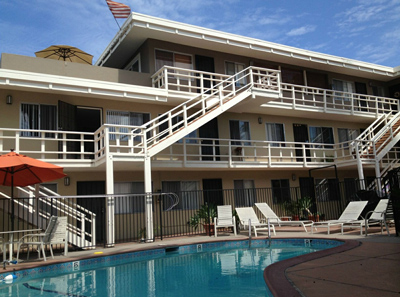 The 34-unit apartment complex in Pacific Beach at 930 Thomas Ave., San Diego 92109, has been sold for approximately $6.8 million. Courtesy photo