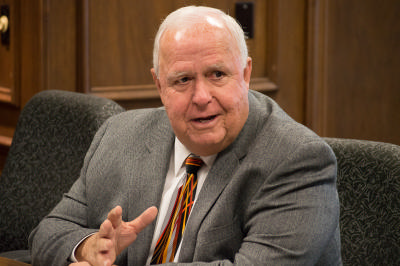 The status of San Diego County's commercial real estate market was the topic of a roundtable discussion held at The Daily Transcript offices earlier this month.

A surplus of capital may be around to acquire commercial properties, though filling these buildings could be an issue, participants said.

Mark Riedy, executive director of the Burnham-Moores Center for Real Estate at the University of San Diego, said interest rates are improving and there is plenty of capital to go around.

"The capital is there, but the deals are smaller," Adam Robinson, SR Commercial principal, said.

"Things opened up a little bit on the debt side in 2013," Zlotnik said. "New net-lease deals started happening toward the end the year."

Steve Avoyer, a principal at Flocke & Avoyer who specializes in retail property, said that while there was a tremendous amount of fear in the retail industry from 2009 to 2011, the markets have been calming down since.

Avoyer said investors from across the country have been looking at San Diego County retail properties lately.

Looking at the office market, Steve Center, Cushman & Wakefield senior managing director, said only a handful of submarkets have Class A vacancy that exceeds 10 percent.

As for new development, Nathan Cadieux, leasing and land sales director for Corky McMillin Cos., said his company has financing from Stratford Land Fund of Texas for its huge Millenia development in Chula Vista.

Cadieux said that unlike the sprawling masterplanned developments of old, this project will feature densities of 30 to 40 residential units per acre.

While The Irvine Co. is determining when to pull the trigger on its proposed 300,000-square-foot La Jolla Center III development in the University Towne Center market, and more speculative projects are planned in the Del Mar Heights area, not every suburban market is ready for new office development.

Alexander said that while plans ultimately call for millions of square feet of new office space on a Jay Paul Cos.-owned property in Rancho Bernardo, the rents won't be high enough to justify new speculative construction for a while.

"You can rent space in RB for about $2.46 per square foot. This needs to climb at least another dollar before you can justify new construction … and development isn't getting any cheaper," Alexander said.

"Not all ships are rising. Those who are waiting for the market to come to them may struggle," Center said.

JLL's Alexander said it isn't as if this repositioning is going to become more expensive.

"If you reposition these buildings with new systems and other upgrades, you can get more rent," Alexander said.

Most of the roundtable participants said they are upbeat about this year, though some concerns linger.

"While we're bullish on 2014, there aren't as many good deals anymore," Robinson said.

"2013 was another notch on the road to recovery," Muna said, adding that the danger for landlords is they could become too aggressive with their rents too early.

Galaxidas, whose firm has been handling the lease for Tesla Motors in Fremont, said the automaker decided it would rather remain within its own footprint than have a major expansion of its research and development facility.

Alexander said not everything can be downsized.

"The one thing you can't downsize is labs," Alexander said.