A partnership of Equity Group Investments and San Diego-based Parallel Capital Partners has paid a total of $72.5 million for the three-building Wateridge Plaza office complex in Sorrento Mesa.

The acquiring partnership was EP Wateridge LLC, which took out a $52 million H2 Financial Funding loan to purchase the property.

Adam Edwards, of Eastdil Secured, was the broker for the seller. The buyers represented themselves.

Wateridge was sold to the Beacon Capital and C-III partnership for $50.5 million in 2011.

American Specialty Health and Eddy M’s Bistro are among the tenants of the complex, which currently has an occupancy rate of 72 percent -- or 28 percent vacant. 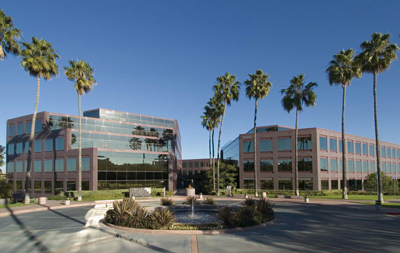 A partnership of Equity Group Investments and San Diego-based Parallel Capital Partners has paid a total of $72.5 million for the three-building Wateridge Plaza office complex in Sorrento Mesa. Courtesy photo

The building at 10201 Wateridge Circle, was only about 10 percent leased according to a survey by The CoStar Group (Nasdaq: CSGP) within the past month.

Wateridge has had its ups and downs since 1984, having gone through at least one bankruptcy not long after it was constructed.

Recently, the complex -- previously owned by a GE Asset Management entity -- was deeded back to lender Wells Fargo Bank as an agent for Nomura Credit & Capital in 2009.

The property -- which was about 60 percent vacant at the time it went back to its lenders -- was dealt a body blow earlier that year after Cardinal Health (NYSE: CAH) vacated the buildings. Prior to the recession, Cardinal had occupied about 185,000 square feet in the complex.

"The Quinteles space was old space that we plan to revamp," Root said.

“Wateridge Plaza is the ideal address for companies seeking the highest profile location, unparalleled campus amenities, panoramic canyon views and superb freeway access," Root said. "Most importantly it expands our presence in the Sorrento Mesa area, a technology and life science corridor which we believe is an emerging hub of the San Diego office sector. Home to global leaders such as Qualcomm, Carefusion and NuVasive, Sorrento Mesa is rapidly evolving into a world-class life science and high- tech cluster.”

While Parallel hasn't issued a figure, the San Diego firm said it will augment these investments with additional capital improvements to further enhance the institutional quality of the asset.

Along with Root, Parallel Capital's principals include Jim Ingebritsen and Jim Reynolds, who each worked The Shidler Group for more than 20 years.

After suffering through this past recession and a de-listing of the REIT's stock on the New York Exchange, the REIT's headquarters that were in San Diego and Honolulu were consolidated at the Honolulu location in 2012. It is still the largest office REIT in Hawaii.

In 2002 a partnership that included these then-Shidler Group principals paid $65 million to acquire the 356,504-square-foot Seaview Corporate Center in Sorrento Mesa.

That property was then sold to a Principal Financial Group-controlled partnership for $92.1 million in 2004.

They re-acquired that property at the credit crisis' height in 2009 from Principal Financial Group for $75 million, and sold it to John Hancock Real Estate in 2011 for $109 million.

Parallel added more than $400 million in commercial real estate to its portfolio last year, with key purchases in Dallas and Orange County.

The firm also is also in escrow to purchase a 383,000-square-foot office complex in Long Beach, and has other properties from other areas of Southern California and Texas.

Equity Group Investments is part of a Zell network with tens of billions of dollars worth of office and apartment properties.