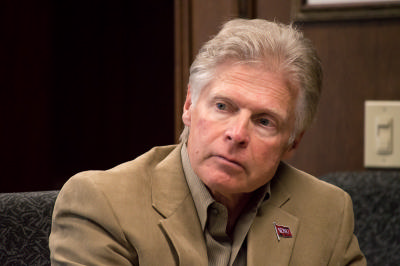 Equity and debt seem to be flowing freely from every pore to commercial real estate, and the main problem appears to be finding properties in which to invest.

The status of capital markets and where the money is going were key topics during a recent roundtable discussion at The Daily Transcript office.

"There's a flood of capital," said Lorne Polger, Pathfinder Partners co-founder, adding that $25 million to $50 million equity checks are being written all the time. "The U.S. is viewed as a safe haven."

Dan Phelan, Pacific Southwest Realty Services president and CEO, said there was between $80 billion and $90 billion in commercial mortgage-backed securities issuances in 2013 and that this figure should climb to $100 billion to $120 billion in 2014.

As for what this money is buying, Louay Alsadek, a CBRE (NYSE: CBG) senior vice president and capital markets specialist, says Class A office buildings continue to be very popular in downtown San Diego and in the suburbs.

"There have been a lot of Class A office building sales," Alsadek said, adding that these most desired buildings won't be available forever.

When Class A office buildings are purchased, Phelan said, firms that are often institutional buyers now seem to be taking their lead from The Irvine Co., which rarely sells a building once acquired.

With limited Class A availability, Alsadek said, the Class B office properties are now getting a serious look.

Lynn LaChapelle, a JLL (NYSE: JLL) managing director and capital markets specialist, said there is almost a 20 percent difference between average rental rates for Class A buildings versus Class Bs.

Randall Gorman, a La Jolla Capital Group principal, added there is even a sizable rent gap between B and B+ office buildings.

LaChapelle said repositioning properties is the name of the game whether they are office buildings needing a facelift, or retail assets needing to be transformed.

"You can take an old retail property and redevelop it with a residential component. It's all about repurposing," LaChapelle said.

LaChapelle, who said there are tremendous opportunities for investors, noted how TIAA-CREF, after having paid $179.7 million for the 265,000-square-foot Forum shopping center in Carlsbad in 2011, was able to boost the rents at the center by 20 to 30 percent.

While retail rents in the best properties appear to be climbing, many properties are still languishing by high occupancies and stagnant lease rates.

Jamie Dick, Newmark Realty Capital Inc. vice president, said however, that while average retail vacancies countywide tripled from about 1.5 percent prior to the recession to closer to 4.5 percent today, this is still a very respectable figure.

Whatever the merits of the properties, Dick warned that lenders are pushing money so quickly out the door at such low long-term interest rates, they could again be in trouble down the line.

"The banks are acting like what got the S&Ls into trouble in the 1990s," Dick said.

Conversely, Dick said there were a lot of payment and maturity defaults during the recession, and many of the maturity defaults are on perfectly good loans that may now be extended without any significant risk to the lender.

LaChapelle said loan transactions are once again returning to multiple pieces of debt on the same property, much as it was prior to the recession.

"Debt will have an A piece and a D piece (such as mezzanine debt)," LaChapelle said.

Dick said while there is plenty of competition in underwriting these loans, and even as low as these interest rates are today, "there is pressure not to compete on price."

Looking ahead to future development, Dick said "we really ran out of significant development land about 10 years ago, so we need to go vertical."

LaChapelle, who noted that there are plans to keep going vertical with 38-block IDEA (Innovation+Design+Education+Arts) District in downtown San Diego's East Village, said while she is excited about what is happening there, luring a major Fortune 500 company to downtown San Diego is another matter.

LaChapelle recalled how in the 1990s it appeared that Sun Microsystems (Nasdaq: JAVA) was planning to take hundreds of thousands of square feet in downtown San Diego, but backed out at the last minute.

"It would have been transformative," LaChapelle said.

Alsadek said that he thinks to get a large high-tech tenant in downtown, it will have to start small, say 25,000 square feet or even smaller, and grow from there.

"It's a phenomenal time for these companies to get their own buildings," Bohlken said adding with inexpensive Small Business Administration financing, along with cheap conventional lending terms, the time is now to buy rather than rent.