A unit of New York City-based Emmes Group of Cos. -- which already owns two office towers here -- has paid a total of $155 million to acquire the downtown San Diego buildings at 701 B Street and 707 Broadway.

The seller of both properties were partnerships controlled by the Trizec unit of The Blackstone Group (NYSE: BX).

LaChapelle, Bob Prendergast and Patrick Inglis, also with JLL, represented Blackstone in the transaction. The Emmes Group represented itself.

The buildings' leasing will continue to be handled by Matthew Carlson, J.P. Huntington and Brooke Giuffre, of Cushman & Wakefield.

According to a CoStar Group (Nasdaq: CSGP) report, the 701 B Street building, which was once known as the Imperial Bank Tower before Merrill Lynch took over the signage years later, was 87 percent leased at the time of the sale last month. The building, developed by the Trammell Crow Co. in 1982, was renovated in 2008. 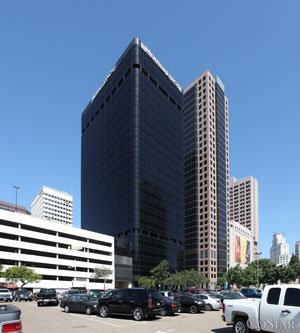 The 560,329-square-foot 701 B Street building, known as the "Darth Vader building" because of its black glass, sold for $120 million. Photo courtesy of CoStar

The 707 Broadway building, once known as the Washington Mutual Building, was constructed in 1961.

The 707 Broadway building, recognized by BOMA San Diego as a renovated building of the year in 2002, is fully WiFi-enabled with fiber optic cable and DSL.

CoStar pegged 707 Broadway's current vacancy at 26.7 percent or more than a quarter empty. The property underwent a major renovation in 2010.

LaChapelle said 701 B and 707 Broadway share a common parking garage, and didn't seem to worry about the 707 becoming full.

"The 707 building is a great asset," LaChapelle said. "It has all that parking and it is in the middle of the IDEA (Innovation+Design+Education+Arts) District. I really believe that area is going to get a lot of traction. With new residential and digital media companies expanding that whole area is going to really open up." 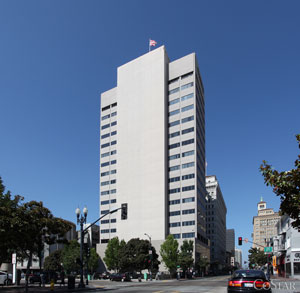 The 187,304-square-foot 707 Broadway building was acquired for $35 million. Photo courtesy of CoStar

LaChapelle said the smaller floor plates at 707 Broadway are ideal for smaller companies.

The Emmes Group already has a downtown San Diego presence.

In November 2012, a partnership controlled by the New York investment firm paid $135 million for the 553,715-square-foot 1 Columbia Place building (also known as Columbia Center) at 401 W. A St. CoStar put the occupany at 83.5 percent.

In August 2013, another Emmes partnership paid $35 million to acquire what is now known as 2 Columbia Place at 1230 Columbia St. That building is 95.6 percent leased, according to CoStar.