After sitting vacant for more than 30 years, the derelict Pernicano's and Casa di Baffi restaurant spaces at Sixth Avenue between University and Robinson avenues and an adjacent parking lot are being put on the market by the Pernicano family for a reported $12 million.

The patriarch of the family, George Pernicano, declined to sell the Hillcrest property for decades, saying he wanted to reopen the restaurants, which total 8,582 square feet. That never happened, though, and despite receiving many complaints, the city never launched an eminent domain action to redevelop the property.

Katie Keach, deputy chief of staff for San Diego City Council President Todd Gloria, said it will be interesting to see what proposals emerge. Keach said she has heard ideas ranging from a mixed-use development to boutique hotel.

Gloria has been trying to get something going with the property at least since 2009.

The listing agent on the property is Jeannine Savory, who heads The Savory Group of Berkshire Hathaway HomeServices office at 516 Fifth Ave. in the Gaslamp Quarter.

The approximately 80-space parking lot that was fenced off for many of those 30 years was opened in 2010 to allow drivers headed to restaurants in the area a place to park. 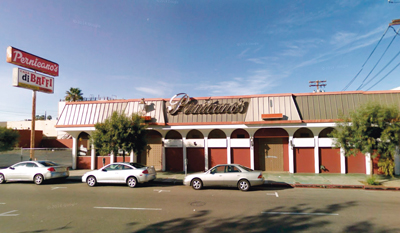 The Pernicano's and Casa di Baffi restaurant spaces at Sixth Avenue between University and Robinson avenues and an adjacent parking lot are being put on the market by the Pernicano family for a reported $12 million. Photo by Google

Corinna Gattasso, a broker associate and retail specialist with Willis Allen Real Estate who has long handled transactions in the area, said that although the site has languished for years, it has potential.

"Given the location is the 'gateway to the Hillcrest/Uptown Neighborhoods,' situated right off [state Route] 163, I believe the site lends itself to a mixed-use project with either residential units or hotel rooms above," Gattasso said.

"Adding retailers and restaurants to the ground floor, especially a version of Pernicano’s would be a great nod to the family legacy. This site has the opportunity to create phenomenal synergy for such a high-profile block in one of the most vibrant neighborhoods in the county."

Steve Avoyer, president and co-founder of the Flocke & Avoyer commercial real estate firm, which specializes in retail properties, said the site "is a terrific piece of property."

"I view this as an extension of the Hillcrest community," Avoyer said, adding that the $12 million price seemed high to him.

Avoyer said he envisions specialty retail and restaurants on the ground floor and condominiums or apartments above.

"They would definitely need to go up," Avoyer said.

Under a current ordinance, developers may build as high as 50 feet without getting an extra permit, but must obtain special permission if they wish to build as high as 65 feet, a height that would be considered out of character for the area.