The Douglas Wilson Cos. has sold its 80,651-square-foot office building at 1620 Fifth Ave. -- formerly the Robert F. Driver building -- to Bosa Development for $18.5 million.

While Vancouver-based Bosa is best known here for its high-rise condominium projects, it is also active in office, industrial and retail development in other parts of North America. The company is headed by founder Nat Bosa.

Richard Weir, executive vice president of Bosa Development, said the firm plans to keep the Class B office building as it is.

The nine-story building has had the Douglas Wilson logo atop it since Wilson's company acquired the property in August 2010 for $10 million with $5 million in financing.

"The building has a good roster of tenants," Weir said.

Tenants at the 1620 building include the Bank of Southern California, the law firm of Hervey & Wood, J. Public Relations Inc. and Public Policy Strategies, according to The CoStar Group (Nasdaq: CSGP). 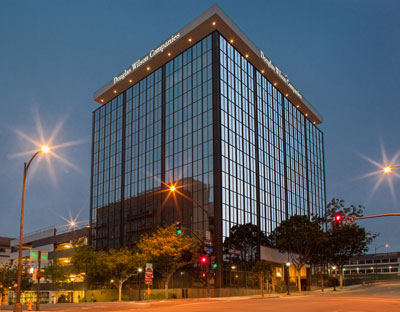 The Douglas Wilson Cos. has sold its 80,651-square-foot office building at 1620 Fifth Ave. -- formerly the Robert F. Driver building -- to Bosa Development for $18.5 million.

Built in 1985 by Robert F. Driver as headquarters for the Driver Insurance Co., it was 35 percent leased when Douglas Wilson acquired it four years ago, said Nicholas Wilson, the company's managing director and son of the founder. Douglas Wilson will retain its space.

“When we acquired the building, it was part of a strategic shift for our company from working with properties in receivership to a more traditional real estate base,” said Nicholas Wilson. “We looked at its potential and renovated the building with an eye to attracting creative companies like marketing and architectural firms and have created an attractive tenant base for the new owners ... This is one the most visible office properties downtown.”

Weir said he hopes this acquisition will be one of a number of office properties Bosa will acquire in downtown San Diego.

In the meantime, by early next year Bosa will break ground on what is known as Parcel 9, located at southeast corner of Broadway and Pacific Highway adjacent to the Santa Fe Depot. That condominium property will feature 222 residences in a 42-story tower, making it one of the city's tallest buildings.

Weir said he doesn't believe Bosa will have any difficulty selling the units.

The company has built downtown residential developments here from the 43-story Electra in the Marina District to The Grand and Bayside Towers overlooking the North Embarcadero.

Bosa also has an office in San Francisco.

Douglas Wilson's recent acquisitions include a site in Tempe, Ariz., where it is planning to build a 270-room Kimpton hotel and 280,000 square feet of office space.