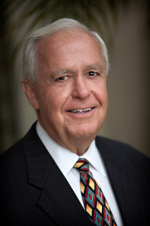 One of Mark Riedy’s greatest influences has been the relationships he’s built and fostered in his years at the Burnham-Moores Center for Real Estate at the University of San Diego.

In 1993, the center consisted of only Riedy, and now he is the executive director and it has grown to 13 employees, and a graduate and undergraduate program.

Riedy has people skills, and he doesn’t get nervous whether he’s speaking in front a class of 30 students or a room full of hundreds of industry professionals. He prides himself and the center on helping people form professional relationships that help further their careers.

He pulled open a drawer in his office where he keeps thank you cards.

“The difference you make – you never know how you’re going to make it and you make it one student at a time,” Riedy said.

Many of the programs put together each year by the center have become traditions, including the annual conferences and the career expo.

“A lot of stuff works, so we’re building off tradition every year,” Riedy said.

The programs bring industry members and students together to build relationships. The center works to enhance relationships between student/industry, industry/industry and student/student.

Riedy learned how to create and enhance relationships when he ran two trade associations.

“When you have [national] firms giving you $25,000 per year, you have to bend over backward to learn who they are, create relationships and do things that they want – and not just lobbying,” Riedy said. “Our job was to create relationships both within the industry and with every member of the House and Senate … and the key regulators of Fannie Mae and Freddie Mac. I think that’s when I really knew I had to learn those things and it sort of came naturally.”

Riedy’s next mission is to build a bridge between the center and the military.

The Burnham-Moores Center was the featured program at the university’s scholarship appreciation luncheon, where Nick Norris, a former Navy SEAL and recipient of multiple scholarships, was a featured speaker.

Through students like Norris, Riedy learned that former military who are interested in joining the commercial real estate industry don’t know the avenues to get there. Veterans contribute their qualities to the program – being mission-driven, disciplined and teamwork oriented. There are 50 people transitioning out of the military each month from Miramar alone.

“They don’t know how to get into commercial real estate – they don’t even know where the bridges are like us. So we’ve got to figure out a way to do that, and we’re going to,” Riedy said.

Riedy and the Burnham-Moores Center marked the 20th anniversary as a celebration fundraiser for scholarships. There will be a black tie gala in May to raise money for scholarships. He said there are dozens of people who he has been forming relationships with who he can now ask to make major donations to the fundraiser.