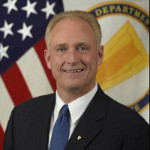 After a lifelong career of government service that included 24 years in the Navy, three years as a civil servant, and six years as a member of the Senior Executive Service, Howard Pace had a bit of anxiety two years ago when he transitioned to the private sector to become vice president and chief strategy officer of ViaSat, a global producer of satellite and other digital telecommunications products, both for commercial and government clients.

“Making this big jump to (private) industry was fraught with, 'Well, what will it be like?' and 'Will I have as much fun as I have serving my country and serving the Department of Defense?'” said Pace, who dreamed of being a naval officer from the time he was a 3-year-old in his native Kentucky and enlisted in the Navy at 18.

Pace's concern was understandable, especially given his distinguished, action-packed military career. He was initially a chief petty officer stationed at Naval Submarine Base Bangor, near Seattle. Via the Enlisted Commissioning Program, Pace attended the University of Washington, earning a degree in mechanical engineering. He later qualified as a Surface Warfare Officer, serving aboard USS Elrod during Operation Desert Storm, Southern Watch, Joint Endeavor, and Support Democracy. He also served aboard USS San Jacinto and USS George Washington.

But, Pace said his fondest recollections of nearly a quarter-century in the Navy have nothing at all to do with military warfare, personal recognition or his individual achievements.

“I think the greatest highlight that I ever had in my career was (seeing) the amount of people that worked for me that were selected for officer commissioning programs, college programs...promoted, advanced,” Pace said. “I got the biggest thrill out of mentoring young men and women from being high school kids -- with very little responsibility and sometimes not really clear goals where they wanted to go, what they wanted to do – then giving them focus and helping them set those goals and achieve them.”

Similarly, Pace enjoys the daily interaction and spirit of camaraderie with his team at ViaSat, where he is responsible for assisting in the creation, communication and execution of strategic initiatives within the company. He said the company's annual revenue is approximately $1 billion, derived almost equally from private and government clients.

“We have created this wonderful environment and we have just this high-caliber, high-talented group of folks that is a pleasure to work with on a day-to-day basis,” Pace said. “No one asks 'What's in it for me?' They're always about doing the right thing.”

Any anxiety that Pace may have had about leaving government service two years ago has long since dissipated.

“I transitioned from military life to becoming a civil servant and then a member of the Senior Executive Service, and it just kept getting better and better and better, he said. “And now, in actuality, I'm still serving all of the above and having a ball. I've really enjoyed ViaSat. It's been a fantastic place to work and I wouldn't want to be anywhere else.”

-Lovitt is a Jolla-based freelance writer.