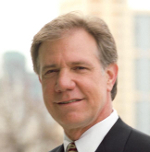 Most people would consider a Grand Funk Railroad concert an unlikely place to contemplate a life-changing decision. But that's exactly where in 1971, Russ Valone, president and CEO of San Diego-based MarketPointe Realty Advisors, began to think about attending college elsewhere than West Virginia University, in his home state.

“I was freezing to death (at the concert at WVU) and I'm watching all the girls running around the campus in their ski parkas and their heavy clothes. They were covered head to toe,” Valone said. “And I came home (to Martinsburg) after that weekend and I'm sitting at home, watching TV, and there was a show about California and all the girls running on the beach and I decided at that point in time, California's where I'm going to go to college.”

Valone's father was living in Fullerton at the time and welcomed his son into his home. Valone finished his senior year in high school and then went on to Cal State Fullerton as an in-state student and graduated with a degree in anthropology.

“I sort of recognized I could still be an anthropologist and do what I do because what I'm doing in the housing market is studying people's wants and desires relative to housing,” Valone said. “My main driver has been to understand the consumer.”

Data collected by MarketPointe Realty Advisors is of great value to its clients, mostly homebuilders, land developers and investors. The company evolved from Market Profiles when Valone was assigned to start its San Diego operation in the mid-'80s. Valone later purchased it from Market Profiles, changing its name in 2000.

“I guess you would say that we're economist demographers and we're real estate analysts, and that our main goal is to study the new-home housing market and act as an objective third-party observer for our clients,” Valone said.

Additionally, Valone is actively involved in the Building Industry Association, including outreach and communications programs that help to illustrate the positive impacts of homebuilding in the San Diego region. Since serving as co-chairman of the BIA's Campaign 2008 Committee, Valone has also been significantly involved in the political apparatus of the BIA.

He also supports the nonprofit BIA Cares For Kids program. And, for the past two decades, Valone's family Christmas party has been the source of an annual toy drive for the benefit of local underprivileged children.

Valone certainly has no regrets about having left West Virginia all those years ago.

“Thank God I made that decision forty-some years ago and, really, thank God for Grand Funk Railroad. If I hadn't gone to that concert, I probably would have ended up at WVU.”