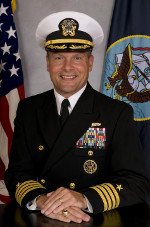 From 2011 to 2013, Capt. Winton Smith served as commanding officer of Naval Base San Diego, the main homeport of the Pacific Fleet and the largest surface Navy base in the Pacific.

The base is home to more than 50 ships, roughly 180 tenant commands, and more than 35,000 military and civilian personnel. Its primary mission is to support the operating forces of the U.S. Pacific Fleet. For sailors, that usually means deployment overseas.

“But when they’re back home in San Diego … their second calling in life is to the community,” Smith said.

Smith’s commitment to the community resulted in a tenure marked by community engagement, environmental stewardship and open communication.

“My approach in life has always been one of selfless service, taking care of others. If it’s not the sailors and their families, it’s the community surrounding Naval Base San Diego,” he said. “Especially in times like this, when we’re limited on resources, we need to take care of one another.”

Sensing that the community had become disconnected with the Navy, Smith opened the base to the public for the first time since 9/11. In December 2011, he allowed civilians to drive along the base’s waterfront to view ships decorated with holiday lights. Within the first two hours, more than 660 cars passed through the base.

“That told me there’s a starvation, a yearning to reconnect with the Navy,” he said.

He also initiated the first-ever Fleet Week Sea Festival at the base, offering ship tours to more than 10,000 members of the public over two days.

Smith completed $10.8 million in energy, water and renewable energy projects and initiated programs to raise awareness of utility usage. His efforts brought about a 35.6 percent reduction in water use from the base’s 2007 baseline, and a 14 percent reduction in energy use from the 2003 baseline. He was directly responsible for the base receiving more than 40 awards, including the 2011 GreenGov Presidential Award.

Yet his command was not without challenges -- chiefly, the automatic spending cuts that aimed to reduce the government’s budget by $1.2 trillion over 10 years. Smith was forced to furlough workers and monitor spending.

Sequestration required him to manage the base like a chessboard, he said. He worked more closely with the Point Loma and Coronado bases, and opened lines of communication with tenant commands, sailors, city officials and the community to keep all parties informed. He even created Facebook video chats to speak directly to the public.

In August, command of the base was handed over to Capt. F. Curtis Jones. Smith was tapped to serve as the executive assistant to the Deputy Chief of Naval Operations for Fleet Readiness and Logistics in Washington, D.C.

But he said he misses San Diego.

“I miss the camaraderie first and foremost. San Diego is big enough to do a lot; there are so many activities,” Smith said. “Yet it’s small enough that you get to know people very well.”