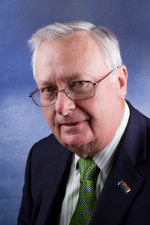 Growing up in the 1960s, Larry Blumberg decided it made sense to join the U.S Navy instead of waiting to be drafted. He thought he would serve a tour, but ended up liking it so much that he stayed for 30 years and retired as a Navy captain about 20 years ago.

He spent most of his naval career on board destroyers and was based out of Hawaii until the 80s when he sought a transfer to San Diego as his home port. Before retiring, he ran a software facility for the Navy in Point Loma, which paved his transition to private industry.

For more than a decade, Blumberg worked as director of West Coast operations for defense contractor DRS Technologies, leveraging his expertise to help write proposals and manage contracts for testing combat systems.

“Since the military is such an important part of our economy here, a group of us felt it was essential to form a separate organization to support and represent the defense community, and improve communications between the military, our elected officials and the business community,” Blumberg said.

“It’s almost hard to turn around and not run into someone associated with the military -- whether they are your neighbors or your Little League coaches.”

A study of the military’s economic impact by SDMAC puts that in perspective – for 2013, the military accounted for $24.6 billion in direct spending and 302,000 jobs, both direct and indirect, which represents 22 percent of all local jobs. Total defense related spending will gross $32.2 billion for 2013, reports the study.

Blumberg is most proud of a couple significant advocacy achievements since SDMAC was founded in 2004.

Back in 2006, when the San Diego County Regional Airport Authority wanted to locate the new international airport in Marine Corps Air Station Miramar, Blumberg and his associates at SDMAC opposed the move and mustered support against it.

“We formed a political action committee that defeated that proposition and it got us on the front page in terms of recognition in the community,” Blumberg said. “The other thing I am pretty proud of is advocacy against unscrupulous businesses that targeted young military families with payday loans at high interest rates, excessive fees and questionable terms.”

SDMAC now works closely with Connect, the industry accelerator, and with the chamber of commerce, relationships which he points out didn’t exist a few years ago.

“Now we are working to ensure our region continues to welcome the military and understands how vital it is to the region,” he said. “What’s unique is the relationship between the military and the local community -- it’s like in no other place. Retired military vets have also made tremendous contributions.”

What’s next for him?

“One of these days I’m going to play a lot more golf.”