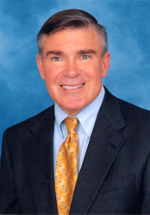 But even though his positions have often taken him into the political arena -- whether arguing in favor of local businesses or protecting wetlands -- he was not prepared for his year to be so political, starting with a fractious relationship with former Mayor Bob Filner and ending with a zoning dispute in Barrio Logan.

“It’s been much more intense than I ever would have anticipated,” he said. “Fortunately, I’ve had great support from my board, which is one of the most collegial group of people I’ve ever worked with.”

Hall, who has been bipartisan in political donations, gave $750 to Filner’s mayoral campaign in 2012. But Filner had barely taken office when he picked a fight involving the waterfront, abruptly halting the appointment of two port commissioners in a dispute over the selection process.

It took three months to settle the matter, but in the meantime, Filner blocked distribution of funds for promoting San Diego as a tourist destination during a five-month squabble with local hoteliers. Many members of the tenants association complained they were losing business because the city wasn’t advertising itself.

And then came the sexual harassment scandal. For Hall, it was personal.

Irene McCormack Jackson, the first woman to come forward, had handled communications at the port when Hall was chairman. Soon after, Sharon Bernie-Cloward, president of the tenants association, and retired Adm. Ronne Froman both told their own stories of being harassed.

“I’d had close working relationships with all three women,” Hall said. In August, he called on Filner to resign, saying that his “degrading and inappropriate behavior towards women” had made it impossible for him to stay in office -- and made it harder for his association’s members to run their businesses.

Even though Filner is gone, Hall and the association have stayed active on the political front. The association backs the San Diego Shipyard Association in its attempt to overturn the City Council’s zoning plan for Barrio Logan, which the shipyards say would hamper their operations.

Partly because of the dispute, the association has endorsed Kenneth Faulconer -- an outspoken opponent of the plan -- for mayor in his race against David Alvarez, the plan’s author. Hall has contributed $250 to Faulconer.

Hall, an owner of 4Liberty, a cable and Wi-Fi communications firm, says that even though the first half of his two-year term has been largely focused on politics, he’s looking forward to the second half.

“Businesses are growing, and both the economic health and environmental health along the San Diego waterfront are improving,” he said. “One of the interesting things that came out of the (marketing) dispute with Filner is that a lot of our members are combining their marketing efforts in a very collaborative way. I’m extremely bullish about what we’ll be seeing in the future as that collaboration continues.”