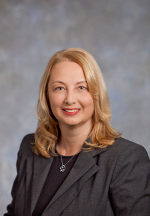 Teresa Halleck, president and CEO of San Diego County Credit Union, said the most important lesson she’s learned is to treat everyone with respect.

“I don’t ask people to do something I wouldn’t do,” Halleck said in an email. “And of course, always do what’s right for the organization.”

Halleck’s goal in 2012 was to stay on the “cutting edge of technology to continue to improve customer service and stay in the forefront of the financial industry.” She said she achieved that goal and continues to strive for the same end in 2014.

“In 2013, SDCCU was first to market with the SDCCU Easy Balance Transfer app, allowing our customers to easily transfer their high-rate credit card balances from other financial institutions to SDCCU using their smart phone,” Halleck said in an email. “Additionally, online service improvements included a major upgrade to online banking, enhanced online security tools and an upgrade of our mobile banking app with real-time mobile deposits. We deployed a new sdccu.com and realized more than 200 percent growth YTD in both Facebook fans and Twitter followers, developed a new iPad Mobile Banking app for tablet users, and launched an interactive online branch and ATM account locator service to highlight SDCCU’s market convenience.”

This past year was notable for SDCCU as it achieved multiple milestones including: it was voted Best Credit Union 14 years straight; Plus, fourth year in a row for Best Place to Work, Best Financial Planning and Best Home Loan Provider; it achieved its first Guinness Book of World Records entry for the SDCCU Super Shred Event; it developed a new iPad Mobile Banking app for tablet users; and opened three new locations.

Halleck replaced longtime SDCCU president and CEO Irene Oberbauer in 2010. Prior to joining SDCCU, Halleck was the president and CEO of Golden 1 Credit Union in Sacramento, where she worked for almost eight years.

By age 35, Halleck was already serving in her second chief financial officer role. Before she turned 40, she had stepped into her first chief executive role at Maryland's State Employees Credit Union.

“I don’t think it was difficult serving as a CFO at a young age,” Halleck said. “I learned early on that it’s all about teamwork and collaboration. Executive leaders don’t get anything done alone; they lead people who get it done. Combine that sentiment with what I said earlier — always treat people with respect and do the right thing — and success is bound to come.”

Halleck earned a bachelor’s degree in accounting from the University of Maryland at College Park, and a master’s in financial management from The Johns Hopkins University.

“I always looked at the competitive landscape as an equal playing field between me and whoever else was on it regardless of gender,” Halleck said. “My advice mirrors what I have said in previous responses: working hard, engaging in teamwork and collaboration, surrounding yourself with strong talent, always doing the right thing and treating others respect is a great formula for advancing in this industry — regardless of gender.”